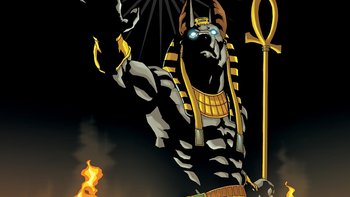 "God is dead. God remains dead. And we have killed him. Yet his shadow still looms. How shall we comfort ourselves, the murderers of all murderers? What was holiest and mightiest of all that the world has yet owned has bled to death under our knives: who will wipe this blood off us? What water is there for us to clean ourselves? What festivals of atonement, what sacred games shall we have to invent? Is not the greatness of this deed too great for us? Must we ourselves not become gods simply to appear worthy of it?"

God is dead, Buddha is dead, Bhagwan is dead. They are all dead. Not because the belief in them has died, but because they are unbelievable. Their fascinating stories only appeal to the most credulous. Their divine address on right and wrong sounds nothing more than their blatant narcissism. We are no longer the lower-beings that need to look up to the gods. We have advanced, revolutionized the world. We have grown strong and we no longer need to find solace in the god's arm. We have grown smart. We have learned to reason.

Our values and morals were based on god. We exercised the right and despised the wrong because we feared hell. But we have outgrown this concept of heaven and hell. We don't need to justify our actions with god anymore. We don't need to dedicate our shock, dismay, and awe to god. Once where we celebrated our penury appalling him, now we have accused him of patronizing. We no longer need his pity, his sympathy and his compassionate forgiveness. We have rejected God and thus we have killed him!

A distressed man who couldn't believe in God anymore wandered off in rage and fury like tempestuous clouds on the horizon to look for a way in which he could free people from god. He later realized he was late to know but early to convince. to his surprise, god was already dead. He didn't have to detach god from people because people were already outgrowing the idea of god but they were deplorably not ready to accept the fact. For accepting the death of god would mean walking away from the warm rays of god. If we can't base our moral virtues and ethics on god, what do we base it on? We would have to explicate our reasoning for moral acts. In doing so we have to escape this comforting land of god and venture out into the sea. The sea is full of danger but its exciting. We have to meet with a lot of ideas. Some of them could be misleading. We have to learn the bedrock of our "right" and "wrong".

where is our right then if not in god? Is it in partying all night hard? Or do we forget about these things and slit our wrist using death as the escape against this dilemma? How do we escape nihilism? Also what ritual do we follow now to cleanse our sins? Who will forgive us now? These are the important questions we are faced with today.

Even if we return from the sea to the land of God , would we be able to convince these land people? There are and will be people who are not ready to admit that God is dead. They have seen the consequences of killing god and they are not willing to risk it. God still lives among many of them and we might have to kill god again.

Ishan asked about 2 years ago

What should we do then??

Rojin Dumre answered about 2 years ago

nietzsche suggests reevaluation of our values.he wants us to overcome nihilism by focusing on sth important.strong individuals will embrace nihilism and overcome it by creating their own world views through science,art,culture,philosophy etc.nietzsche says in birth of tragedy there can only be an aesthetic justification of existence which means art is essential.