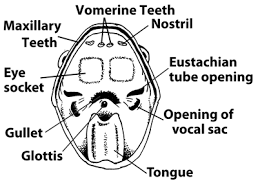 Frog has a ridge of very small cone shaped teeth that is present at the upper edge of the jaw which is known as maxillary teeth. It also consists of vomerine teeth that is present at the roof of the mouth . the main function of the teeth is to hold the prey and keep it still until it has a good grip on it and squash its eyeballs and swallow it whole . as frog doesn’t have any teeth on their lower jaw , they swallow their food whole.

Frogs teeth is said to be:


Each tooth of frog is bent backwards and is conical in shape. It consists of two main parts: the base and the crown. the base is directly connected to the jaw bone and is made up of bone like structure. the crown is the free end of the tooth with is formed by dentine and traversed by numerous fine branchings knowns as canals or canaliculi, which is lead from the interior of the tooth. each tooth consists of a interior with a cavity. this cavity is known as pulp cavity. the pulp cavity consists of highly vascular and nutritive tissue or pulp which further contains odontoblast cells which are used to manufacture materials needed for the growth of teeth.