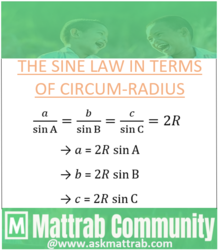 Let ABC be the triangle with all three vertex on the circumference of the circle with center O as shown in fig above.
BO is drawn if the angle is either acute or obtuse as shown in fig(i) and fig(ii). Also, BO is  produced to D to form the diameter BD as shown in fig. [C coincides D in fig (iii)]
Then, circum-radius=OB=R(radius of circle) and BD=2R and angle BCD=900 [in fig (i) and (ii)] being angle at semi-circle.
To Prove: 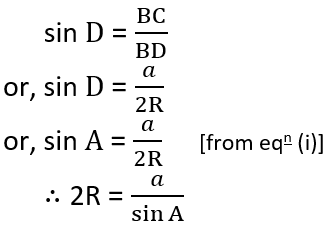 2. For a triangle as shown in fig(ii) 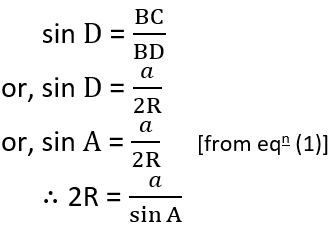 Hence, for every condition we have,

Similarly, we can prove,

Combining these we get,

, which is the Sine Law in terms of circum-radius.
eleven maths Trigonometry