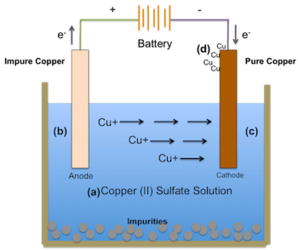 The mass of the substance (m) deposited or liberated at an electrode is directly proportional to the quantity of electricity or charge (Q) passed.

In the mathematical form, this law can be represented as follows:

Faraday further observed that 1 Faraday (96,485C) of charge liberates 1 gram equivalent of the substance at the electrodes.

This means that 1C will liberate one gram equivalent of a substance/96,485, which is the electrochemical equivalent (Z) of the substance.

This goes to a relationship between electrochemical equivalent (Z) and equivalent weight or equivalent mass (E) of a substance, and this can be expressed as:

Moving back to the equation m = ZQ, it can alternately be written as: