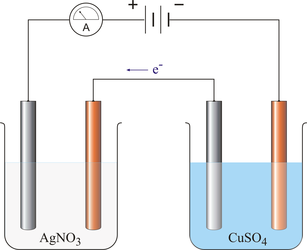 This law states that ” the mass of a substance deposited or liberated at any electrode on passing a certain amount of charge is directly proportional to its equivalent weight of the substance”.

where w is the mass of the substance in grams while E is its chemical equivalent i.e. weight in gms per equivalent. This law can be explained as follows.

Consider three reactions, such as:

Assume that these three reactions are occurring in three separate electrolytic cells connected in series. When x moles of electrons are passed through the three cells, the mass of Na, Cu, and Al deposited are 23x gms, 31.75x gms, and 9x gms respectively. We can see that 23, 31.75 and 9 gm/eq are the chemical equivalent weights of the three elements.

This charge is called as 1 Faraday.

(n = n-factor) By combining the first and second law, we get