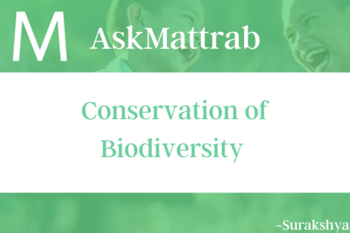 Conservation is the protection, preservation, management of wildlife and natural resources. Conservation of endangered, rare, threatened species is a global challenge. Species number and variability decrease as time passes. The ultimate objective of the concerned authority is to protect the wild species. Usually, two strategies are applied to conserve wild animals and plants.

1. In situ conservation: Literally ‘in’ - inside and 'situ‘ - habitat. It is the conservation of genetic resource in natural population. Due to human activities, wild species are going to decline. If not protected in time they will decline so they are protected in their own habitat. For this government allocate certain area where the density of wild species is higher or where wild lives habitat exists. In situ conservation, government established national parks and wildlife reserve biosphere.  In such areas collecting plants/ animals or their products are regulated and monitored.

i. Wild plants and animals live in their own habitat without human interference.

ii. Reproduction and evolution progress will go in natural way.

iii. It is less expensive and easy to operate

v. It involves protection and large number of populations and their habitat as a whole.

Ex-situ conservation means the conservation of wildlife outside their natural habitat. If wild species are vulnerable in their habitat due to activities of human or environmental causes, they are shifted to different places and grown for study and entertainment purposes. Some examples are botanical gardens, zoological parks, seed banks, tissue culture banks,  gene banks.

i. It is useful for declining population due to declining habitat.

iii. Threatened species bred in captivity, then released into the natural habitat.

iv. It is useful for scientific research.

v. It can be a part of income and entertainment for humans.

vi. It conserves genetic resource for beneficial use.

vii. It involves protection of species from predators and poaching.