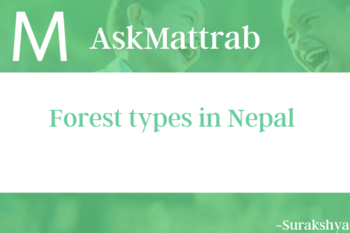 The topographic, climatic and edaphic diversity of Nepal has greatly affected the diversity of plants. So several types of forests are found here. The Forest of Nepal is categorized into the following types according to altitudinal variation. (Stainton 1974 A.D.)

It is extended from east to west below the altitude of  1000m. It is subdivided into the following types:

It is found from 1000-2000m of altitude. It is subdivided into the following types.

b.Pine forest: Pinus roxburghii (rani salla) is dominant in this forest from 900-2000m of altitude. It is found in both north and south-facing slopes. The ground layer of this forest is covered by Woodfordia fruticosa (sano dhayari), Anaphalis busua (seto ekle ghans), Inula capa (gai tihare), etc. In some regions associated with oak forest consisting of different species Quercus (oak-banjh/phalant).

c.Alder forest: extended from 900-2700m of altitude. The dominant species of this forest is Alnus nepalensis (utis). It is commonly found in banks of streams, field margins and unstable land,  which is unsuitable for cultivation.

This forest is found from 2000-3000m of altitude, subdivided into the following types:

It extends from 3000-4100m of altitude. It is subdivided into the following types:

a.Silver fir forest: Abies spectabilis (talis patra) is the dominant species of this forest and extended between 2900-3850m of altitude.  It is mostly found in the south-facing slopes of the central Langtang region, Larix himalaica (lekh sallo) is found. In some regions, this forest is interrupted by the Quercus forest.

b.Birch-Rhododendron forest: It is found between 3300-3800m of altitude. This forest consists of Betula utilis (bhoj patra) and Rhododendron (gurans). In the eastern region, dense growth of species has been found. These include R. barbatum, R.  campanulatum, R. cowanianum, R. falconeri, R. hodgsonii, etc.

It is extended from 4100-above. Large trees not found. It consists following types of vegetation:

b.Caragana-Lonicera forest: It extended from 4100-4800m of altitude and mostly north of the Dhaulagiri- Annapurna range.It consists of Lonicera spinosa and Caragana venicolor (sherma).

c.Alpine meadows: These are high-altitude grasslands (kharks). They are subjected to grazing in the rainy season. During winter, they are covered by snow.  Only grasses are found in such regions. The major vegetations in this area are Primula minutissima (medosero), P walshil,  Potentilla fulgens (bajra danti), Saxifraga stenophylla, etc. Above 4800m, the vegetations are limited only in the form of moss.