↪ When the overlap of orbital’s of two atoms takes place along the line joining the two nuclei (orbital axis) then the covalent bond formed is called sigma (σ) bond.
↪ These bonds can be formed due to ’s-s', 's-p' or 'p-p' overlap along the orbital axis. Free rotation around a sigma bond is always possible. 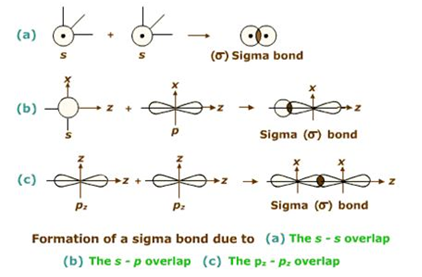 Fig: Formation of sigma bond due to various overlapping

↪ When the two atoms overlap due to the sideways overlap of their 'p' orbitals, the covalent bond is called as pi (∏) bond.
↪ In a pi bond the electron density is concentrated in the region perpendicular to the bond axis.

Characteristics of the pi bonds

↪ The pi bonds are weak because the orbital overlap is partial.

↪ For a complete sideways overlap the 'p' orbitals should be parallel to each other. This is possible when all the atoms of the molecule are in the same plane i.e., there is no rotation of one part of the molecule relative to the other about the pi bond.

Fig: Rotation about a double bond

↪ The electrons in the pi bond are placed above and below the plane of the bonding atoms and so they are more exposed.
↪ They are more susceptible to attack by electron seeking or oxidizing agents.
↪ Hence, they are the most reactive centers in unsaturated (multiple bonded) compounds.