♪⚝Sanjiv❀Jaiswal❁⩸ created in Chemical Bonding and Shapes of Molecules

↪ Valence Shell Electron Pair Repulsion (VSEPR) theory is a simple theory to predict and explain the shape and bond angles in a number of simple covalent molecules and ions.
↪ This theory was proposed by Sedgwick and Powell in 1940 initially and developed by Gillespie and Nyholm in 1957 as VSEPR theory.
The main postulates of this theory may be summarized as follows;

↪ In order to minimize the repulsion forces between them, electron pairs around the      molecules central atom, tend to stay as far away from each other as possible

↪ The strength of repulsions between different electron pairs follows the order:

Prediction of molecular geometry on the basis of VSEPR theory:

↪ In a molecule having two bond pairs of electrons around its central atom, the bond pairs are located on the opposite sides (at an angle of 180o) so that the repulsion between them is minimum.
↪ Such molecules are therefore linear. Some molecules, which show linear geometry are: BeF2 (beryllium fluoride), BeCl2(beryllium chloride), BeH2 (beryllium hydride), ZnCl2 (zinc chloride), and HgCl2(mercuric chloride)

Examples:↪ Beryllium chloride (BeCl2): Here, the central atom Be has two bond pairs in its valence shell. For this molecule, there may be a number of possible structures. Some of them are;

↪ The actual structure is the one in which the repulsion of electron pairs is minimum. This is in structure (III). Hence, BeCl2 is linear molecule.Molecules with three bond pairs: 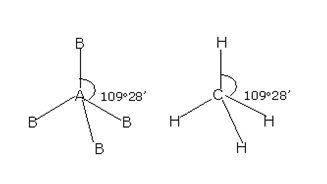 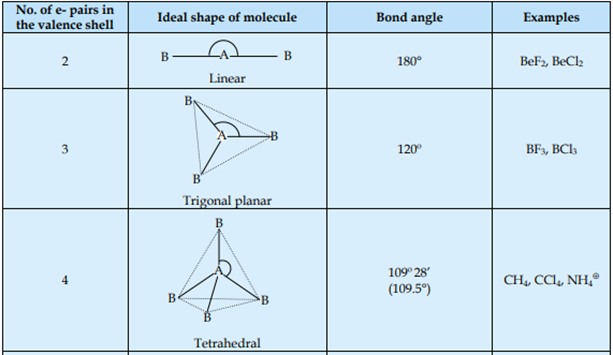