Example, molecules forming hydrogen bonding as a result of an unbalanced electrostatic potential.
In this case, the hydrogen atom interacts with electronegative fluorine, hydrogen, or oxygen.

↪ This type of covalent bond is formed whenever there is an equal share of electrons between atoms.
↪ The electronegativity difference between two atoms is zero. It occurs wherever the combining atoms have similar electron affinity (diatomic elements).

↪ The bond formed by the sharing of electrons between combining atoms, in which both the shared electrons are contributed by one of the bonded atoms only, is called co-ordinate bond or coordinate-covalent bond.

↪ Co-ordinate covalent bonds are usually formed in reactions that involve two non-metals such as a hydrogen atom or during bond formation between metals ions and ligands.

↪ In this type of bonding, the atom that shares an electron pair from itself is termed as the donor.

↪ The other atom which accepts these shared pair of electrons is known as a receptor or acceptor.

↪ The bond is represented with an arrow →, pointing towards acceptor from the donor atom.

↪ After sharing of electron pain each atom gets stability.

↪ This type of bonding is central to the Lewis theory.

↪ Getting a good understanding of co-ordinate covalent bonds can help in properly designing complex organic molecules.

↪ Below we have given a simple diagram of a co-ordinate bond.
↪ The bond is shown by an arrow which points in the direction where an atom is donating the lone pair to the atom that is receiving it. 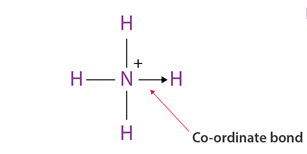 Here are a few examples of the coordinate covalent bond.

↪ The nitrogen atom in Ammonia donates its electron pair to the empty orbital of H+ ion thus nitrogen is donor, H+ is acceptor and a co-ordinate bond is formed

↪ An oxygen atom in water donates its one pair of electrons to the vacant orbital of H+ ion thus a dative bond is formed oxygen atom is donor atom and H+ acceptor atom.