↪ Ionic bonding is a type of chemical bonding which involves a transfer of electrons from one atom or molecule to another.
↪ Here, an atom loses an electron which is in turn gained by another atom.

Examples of formation of ionic bonds

Properties of an Ionic Bond

Due to the presence of a strong force of attraction between cations and anions in ionic bonded molecules, we observe the following properties:

↪ The ionic bonds are the strongest of all the bonds.

↪ The ionic bonds have a charge separation. So, they are the most reactive of all the bonds in the proper medium.

↪ The ionic bonded molecules have high melting and boiling point.

↪ The ionic bonded molecules in their aqueous solutions or in the molten state are good conductors of electricity. This is due to the presence of ions which acts as charge carriers. 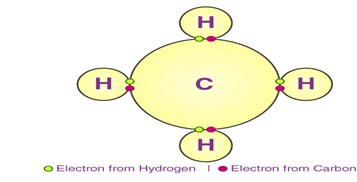 Depending upon the number of shared electron pairs, the covalent bond can be classified into:

↪ A single bond is formed when only one pair of the electron is shared between the two participating atoms. It is represented by one dash (-).
↪ Although this form of covalent bond has a smaller density and is weaker than a double and triple bond, it is the most stable.

↪ For Example, HCL molecule has one Hydrogen atom with one valence electron and one Chlorine atom with seven valence electrons.
↪ In this case, a single bond is formed between hydrogen and chlorine by sharing one electron.

↪ A double bond is formed when two pairs of electrons are shared between the two participating atoms.
↪ It is represented by two dashes (=). Double covalent bonds are much stronger than a single bond, but they are less stable.

↪ A triple bond is formed when three pairs of electrons are shared between the two participating atoms.
↪ Triple covalent bonds are represented by three dashes (≡) and are the least stable types of covalent bonds.

formation of a nitrogen molecule,