Verification of First Law of Electrolysis

For the verification of first law of electrolysis, the following circuit arrangement is performed : 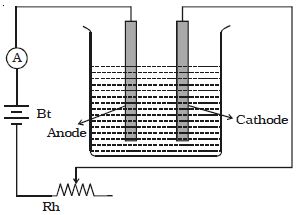 It consists of an electrolyte in a voltameter containing two electrodes, anode and cathode which are respectively connected to positive and negative terminals of a battery through rheostat and ammeter. The ammeter measures the amount of current flowing through the electrolyte whereas the rheostat varies the current. Before passing the current, measure the masses of electrodes. Now the amount of current through the electrolyte is increased turn by turn by the help of rheostat and measure the corresponding mass of ions liberated or deposited on the electrodes. Here, various currents are passed for the same time. It will be seen that the mass of ions liberated or deposited also increases on increasing current.

If m is the mass of ions liberated or deposited on passing charge q then it will be seen as: 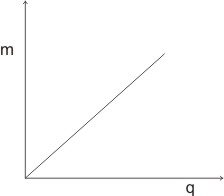 This verifies the first law of electrolysis.