1. What are the functions of Parenchyma, Sclerenchyma and Collenchyma?

1. Parenchymatous cells that contain chloroplasts are the main sites of photosynthesis.

2.It serves mainly for the storage of food material in the form of starches, proteins, oils and fats. The parenchymatous tissues in the root and stem tubers are its good examples.

3.In aquatic plants, parenchyma cells (aerenchyma) have lots of spaces that store air to keep them floating and facilitate exchange of gases

Describe about the structure of Parenchyma, Sclerenchyma and Collenchyma

Mention the role of cuticle.

Cuticle is the outermost waxy/hydrophobic layer made up of cutin; it's main function is to prevent the loss of water in form of water vapor through the epidermis. It also helps in reduction of transpiration in the xerophytic plants to prevent water loss and provides protection against desiccation.

What is the function cortex?

Cortex, tissue of unspecialized cells, is located between the epidermis and the vascular tissue in the plants . It helps in the transportation of water and minerals to the center or core of the root through the process of diffusion. 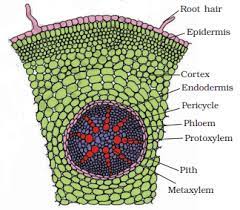 Give one example of stem with conjoint and collateral vascular bundle.

All dicot and monocot plants are the examples of plants with conjoint and collateral vascular bundle.

Give one example of scattered vascular bundle in the stem.

What are Annual rings?

Annual rings are the rings arranged in concentric forms in the bark of the tree, their numebr represmts the age of the tree whereas their thickness depends upon the season that the tree has lived through.

responsible for the secondary growth of stems and roots.

The undifferentiated mass of cells formed during tissue culture which can be further grown into new plants is called callus.

Sclereids or stone cells are the dead cells having extremely thick wall which are spherical or oval shaped. They are generally found in hard parts of plant body.

What are the roles of meristem?

Meristem or meristematic tissues are tissues capable of cell division which are found in all the regions of the plants where growth takes place such as in apex, near internodes and also at the sides (in the lateral position of the plant body).

Therefore, their roles include to aid the primary and secondary growth of the plant body.

Differentiate between spongy and palisade parenchyma.

How is annual ring formed ?

The plant that is present having various climatic condition shows different mode of activities cambium ring. If the season is spring the activity of cambium ring is more forming spring wood or early wood. And, if the climatic condition is not good i.e winter or autumn, the activity of cambium ring is less and form late wood. Because of which there forms different distinct ring with the addition of spring wood and autumn wood that is called annual ring. Each and every year one annual ring is...

The sudden, drastic, continuous and heritable change occured in an organism due to permanent change in gene is called mutation.

Some of the major significances of mutation are as follows:-

1. It helps in evolution because it incresess genetic variations and potential for individuals.

2. It helps the organisms to adjust itself against the environmental stresses.

3. The variations induced by mutation helps in natural selection.

4. It also helps in the evolution process of living beings

Origin: Parenchyma is derived from ground meristem Parenchyma present in vascular tissues is formed from procambium and vascular cambium. It is most primitive, commonest, simplest, most abundant... 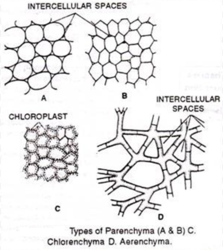 The lignification of cell wall for mechanical function is character of

Companion cells are associated with

Grafting is not possible in monocots because they

Bicollateral bundles are found in

Tissue, present only in dicot is

Adventitious roots in a dicot stem originate from

Which tissue is called starch sheath?

Secondary growth occurs due to

The cambium, which produces cork is known as

Xylem is exarch in

Annual rings are distinct in the plants growing in

Growth rings in dicot stem are formed due to activity

Which of the following monocot shows secondary growth?

In which of the following there is no differentiation of bark, sapwood and heartwood?

The cross section of trunk of tree shows 50 annual rings, the age of tree is

Healing of wound in plant takes place by activity of

Secondary growth is shown by:

Vascular bundles in dicot stem are:

Casparian strips are found in:

Cortex and pith are not differentiated in case of:

Study of annual rings of trees is called: