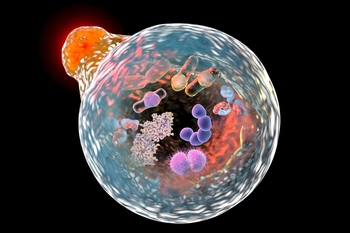 ﻿Discovery : ﻿Discovered by Christian de Duve in 1955 in liver cells of rat.

Occurrence: Present in all eukaryotic cells except mammalian RBC. Also are found in members of protista, mycota, root tip of maize, cotton and pea seeds.

﻿Shape:﻿ Generally rounded but may be irregular

Number: Varies according to cell type. They are particularly abundant in WBC, spleen, liver and kidney.

Lysosomes contain 40 types of hydrolytic enzymes like Proteases (breaks down protein into amino acids), Nucleases ( nucleic acid to nucleotides), Lipase ( lipid into glycerol and fatty acid), Glycosidases  (carbohydrates into monosaccharides) and others.

Under unfavorable condition ( scarcity of food or pathological conditions) the hydrolytic enzymes present in the lysosomes kills the cell (autolysis). Hence, lysosomes are also called "Suicidal bag of cell" 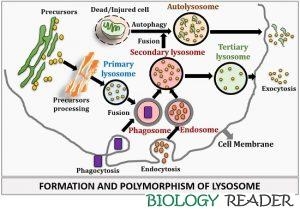 These are small sac like bodies pinched off from Golgi complex or granular endoplasmic reticulum. They contain hydrolytic enzymes in active forms so they are also known as storage granules.

They are also known as heterophagosomes or heterophagic vacuoles. They are formed by fusion of food vacuole with primary lysosomes.

Function : Digestion of food with the help of hydrolytic enzymes.

﻿They are also known as Teloxysomes . They are the lysosomes that contain undigested food which are generally thrown out of the cell by exocytosis.

Function: Storage and removal of unwanted materials from cell through exocytosis.

They are also called autophagic vacuoles or autolysosomes. They are formed by fusion of lysosomes with degenerating intracellular organelles eg: mitochondria, ER by the process of autophagy or autodigestion.

Function: Autophagy involves the digestion of reserve food of cell or some cell organelles like fragments of ER, mitochondria by lysosomal enzymes in Autophagosomes.﻿