Structure and function of Chloroplast 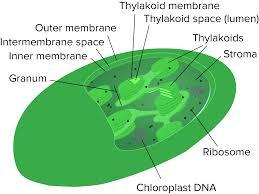 Structure and function of Chloroplast

They are most common plastids founds in the green parts of plants. They are green pigments so colors beings green. The process of photosynthesis takes place in them. They are founds in green leaves which absorbed carbon dioxide from the air and energy from the sunlight. They not found in that part where the light not exposed. 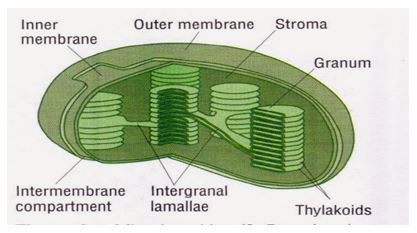 Each chloroplast is discoid and spherical in nature. It is bounded by two membranes. Internally it is filled with matrix known as stroma in which grana are invaded. The matrix contains: DNA, RNA, ribosomes, and starch etc. each granum consists of grana lamellae placed one above the other like stack of coins. In cross section these lamella are paired to form the sacs like structure and has been known as thylakoids. Some of the grana lamellae of thylakoid granum are connected with thylakoid of other grana by the stroma lamellae or fret membrane. Grana are the site of primary photochemical reaction (light reaction) which contains the chlorophylls. The dark reaction of photosynthesis takes place in stroma structure.

1. The most important and fundamental function of chloroplast is photosynthesis and it is also known as kitchen of cell.

3. Chromoplast: attractive and help in pollination.