♪⚝Sanjiv❀Jaiswal❁⩸ created in Oxidation and Reduction

↪ This law deals about the relationship between mass of substance deposited on or liberated from an electrode and their equivalent weight.

↪ It states that, "When the same quantity of electricity is passed through different electrolytes connected in series; the amount of substance deposited on or liberated from the respective electrodes are proportional to their chemical equivalents or equivalent weight." 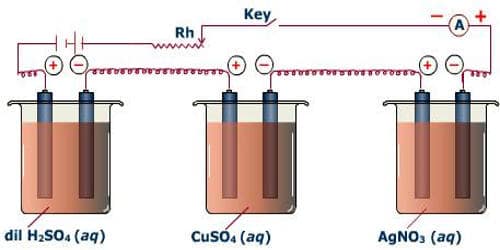 Let the same quantity of electricity is passed through different voltameter connected in series containing aqueous solution of H2SO4, CuSO4, AgNO3, etc. as shown in figure.

The amount of substance deposited or liberated from cathode of these electrolytic cell on passing one coulomb of electricity is equal to the electrochemical equivalent.

Therefore, according to Faraday's Second Law,


From equations Ⅰ, Ⅱ and Ⅲ,

⁕ ﻿Significance of the Faraday's Law

i. It is applicable to calculate the charge carried by single ions.
ii. To calculate equivalent weight of metals.