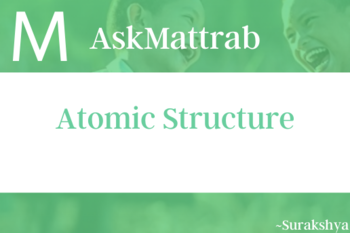 Structure of the Atom

➖By 1900, it was discovered that the atom was not a simple, indivisible particle, but rather it contains sub-atomic particles.

➖J.J. Thomson was the first person who proposed a model for the structure of an atom.

➖In 1886, E. Goldstein discovered the presence of new radiations in a gas discharge and named them canal rays.

➖Another positively charged sub-atomic particle was discovered with experiments of canal rays and named it proton.

➖Thomson proposed that an atom consists of a positively charged sphere and the electrons (negative charge) are embedded in it (as shown in the image given below).

➖Further, Thomson said that the negative and positive charges are equal in magnitude. Thus, the atom as a whole is electrically neutral.

➖E. Rutherford is popular as the ‘Father’ of nuclear physics.

➖Rutherford is largely known for his work on radioactivity and the discovery of the nucleus of an atom with the gold foil experiment (as shown in the image given below.

➖Rutherford said that in an atom, there is a positively charged center known as the nucleus.

➖Rutherford said that nearly all the mass of an atom exists in in the nucleus.

➖According to Rutherford, the electrons revolve around the nucleus in well-defined orbits.

➖According to Bohr, only certain special orbits known as discrete orbits of electrons, are allowed inside the atom.

➖Bohr said that electrons do not radiate energy while revolving in discrete orbits.

➖Neutron has no charge and a mass nearly equal to that of a proton.

➖Neutrons are present in the nucleus of all atoms, except hydrogen.

➖The maximum number of electrons that can be present in a shell is given by the formula 2n².

➖According to the given formula −

➖Likewise, the maximum number of electrons that can be accommodated in the outermost orbit is 8.

➖The electrons, those are present in the outermost shell of an atom, are known as the valence electrons.

➖According to Bohr-Bury model, the outermost shell of an atom can have a maximum of 8 electrons.

➖The total number of protons, present in the nucleus of an atom, is known as atomic number.

➖The number of protons of an atom determines the atomic number.

➖Atomic number is denoted by ‘Z’.

➖Protons and neutrons collectively are known as nucleons.

➖The sum of the total number of protons and neutrons, present in the nucleus of an atom, is known as mass number.

➖The atoms of the same element, having the same atomic number but different mass numbers, is known as isotopes. E.g. Hydrogen atom has three isotopes namely protium, deuterium, and tritium.