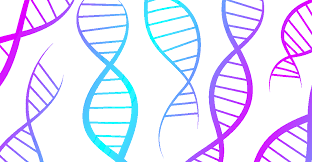 Just started to read Genetics? First, go through these terms.

1. Factors:- Unit of heredity which is responsible for inheritance and appearance of characters. These factors were referred to as genes by Johannsen(1909). Mendel used the term "element" or "factor".Morgan first used symbol to represent the factor. Dominant factors are represented by capital letters while recessive factor by small letters.

2 Allele:- Alternative forms of a gene that are located in the same position [loci] on the homologous chromosome is called Allele. The term allele was coined by Bateson.

3. Homozygous:- A zygote is formed by the fusion of two gametes having identical factors is called a homozygote and the organism developed from this zygote is called homozygous. Eg. TT, RR, tt

6. Phenotype:- It is the external and morphological appearance of an organism for a particular character.

7. Genotype:- The genetic constitution or genetic make-up of an organism for a particular character.

8. Phenocopy:- If different genotypes are placed in different environmental conditions then they produce the same phenotype. Then these are said to be Phenocopy.

Loss of Hybrid vigour due to inbreeding is called inbreeding depression.

It is the smallest unit of DNA that could undergo mutation

Sudden drastic changes in hereditary that stay in heredity as disorders are called a mutation.

Genotypic characters transferred by the parent to offspring is called a trait.

Hybrid is formed by inbreeding cross (cross made between the gamut of the closely related organism).

Cybrid is formed by the outbreeding that is made after crossing between the gamut of a far related organism.

The Cross between the F1 generation and parental generation is called the back cross.

A test cross is a cross made between the F1 generation and recessive parent. It is often done to know if the offspring is homozygous or not or to obtain a homozygous individual.

Outcross is the cross made between the F1 generation and the dominant parent.