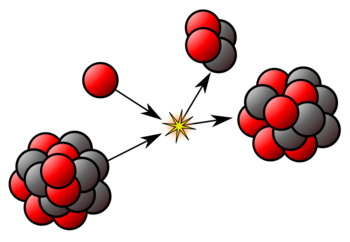 Nuclear binding energy is the minimum energy that would be required to disassemble the nucleus of an atom into its component parts. These component parts are neutrons and protons, which are collectively called nucleons. The binding energy is always a positive number, as we need to spend energy in moving these nucleons, attracted to each other by the strong nuclear force, away from each other. The mass of an atomic nucleus is less than the sum of the individual masses of the free constituent protons and neutrons, according to Einstein's equation E=mc2. This 'missing mass' is known as the mass defect, and represents the energy that was released when the nucleus was formed.


The term "nuclear binding energy" may also refer to the energy balance in processes in which the nucleus splits into fragments composed of more than one nucleon. If new binding energy is available when light nuclei fuse (nuclear fusion), or when heavy nuclei split (nuclear fission), either process can result in release of this binding energy. This energy may be made available as nuclear energy and can be used to produce electricity, as in nuclear power, or in a nuclear weapon. When a large nucleus splits into pieces, excess energy is emitted as photon (gamma rays) and as the kinetic energy of a number of different ejected particles (nuclear fission products).


The mass defect of a nucleus represents the amount of mass equivalent to the binding energy of the nucleus (E=mc2), which is the difference between the mass of a nucleus and the sum of the individual masses of the nucleons of which it is composed.