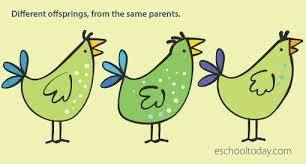 In a family, the children are generally similar to  their parents. The  children resemble the parents in skin color, pattern of hair, color of eyes, etc. It is because the parental characters transfer into the offspring. The process through which the parental characters pass from generation  to generation is called heredity or inheritance. Though similarity  is found among the members  of a family, they are not exactly alike i.e. there are some dissimilarities among them which is called variation. The branch of biology which deals with the mechanism of heredity and variation is called genetics.

The structural/ morphological / physiological differences that provide individuality to each member of a species is called variation. OR,

The difference /dissimilarity from parents to offspring or from the member of the species is called variation.

A. Based on the type of cells

They are the variation that affect the somatic cells only. They are not inheritable. They are acquired by the organisms during their own life time and are lost with their death. These variations are also called as Acquired Variations. They are not important for the evolution point of view.

The possible causes of somatic variations are:

ii) Use and Disuse of organs

They are the variation that affects the germinal or reproductive cells only. They are inheritable and are important foe evolution.

The possible causes of germinal variation are:

Offspring with new genetic combination are born due to reshuffling of parental genes.

Structural changes in DNA or chromosomes are caused due to mutation which results in change in phenotype of the organism.

B. Based on the degree of differences produced

Continuous variation are small and indistinct. They fluctuate on the either side on the average condition. These are also described as fluctuating or plus-minus variation. They don't have any role in evolution as they are unstable and non-heritable. They affect the size, weight, shape or color of an organism or its parts.

Discontinuous variation are large and sudden. These deviate to a great extent from the normal and appear as totally new. They are also described as Mutations. They play an important role in origin and evolution of species as they are stable and inheritable.

1. Variation forms the basis of heredity.

2.They are the source of evolution.

3. They help with the adaptation of the organisms to the changing environment.

4. Due to variation, useful variants of organisms can be created.

5. They provide individuality to each organism.

Differences between Continuous and Discontinuous Variation

Heredity and Variation in Asexual Reproduction

Many eukaryotic organisms like protists, fungi, algae, and lower animals reproduce by asexual methods also. Organisms produced by asexual reproduction are the carbon copies of their parents. They are genetically identical. Such a genetically uniform population produced from single organism by asexual method is called clone. Clones due to their identical hereditary character exhibit no or little variations. Variations in them may be due to environmental factors.

Similarly, identical twins arising from a single fertilized egg are clone to each other, though they are the offspring of their parents. Hence, twins are both genetically and phenotypically identical.

Difference between Clone and Offspring