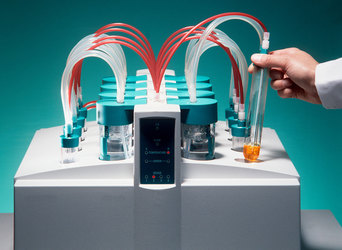 Biotechnology is a new discipline of science in which the latest technology has been applied to biological organisms for the welfare of society. It is the application of scientific and engineering principles to the processing of materials using biological agents to provide goods and services. It is more broadly defined as “any technique that uses living organisms to make or modify products to improve plants and animals or to develop microorganisms for specific uses”.

Plant tissue culture is a collection of techniques used to maintain or grow plant cells, tissues, or organs under sterile conditions on a nutrient culture medium of known composition. It is widely used to produce clones of a plant in a method known as micropropagation. Different techniques in plant tissue culture may offer certain advantages over traditional methods of propagation, including:

·         The production of exact copies of plants that produce particularly good flowers, fruits, or have other desirable traits.

·         The production of multiples of plants in the absence of seeds or necessary pollinators to produce seeds.

·         The regeneration of whole plants from plant cells that have been genetically modified.

·         The production of plants in sterile containers allows them to be moved with greatly reduced chances of transmitting diseases, pests, and pathogens.

·         The production of plants from seeds that otherwise have very low chances of germinating and growing, i.e. orchids and Nepenthes.

·         To clean particular plants of viral and other infections and to quickly multiply these plants as 'cleaned stock' for horticulture and agriculture.

Plant tissue culture relies on the fact that many plant cells have the ability to regenerate a whole plant (totipotency). Single cells, plant cells without cell walls (protoplasts), pieces of leaves, stems or roots can often be used to generate a new plant on culture media given the required nutrients and plant hormones. 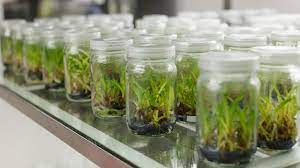 Gene is a part of a DNA segment with a particular character. (DNA segment that expresses a character is called gene.) Many useful genes like Nif genes, Kanamycin resistant gene, Luciferase gene, etc. have been known and isolated. In this technique, a foreign gene of interest can be inserted into other plants by the following methods:

·       Direct gene transfer: It is the process of transfer of a gene of interest directly into plants by conventional breeding, protoplast fusion, etc.

Agrobacterium-mediated DNA Transfer Technology: It is the process of transfer of genes from a plant to other plants through Agrobacterium tumefaciens. 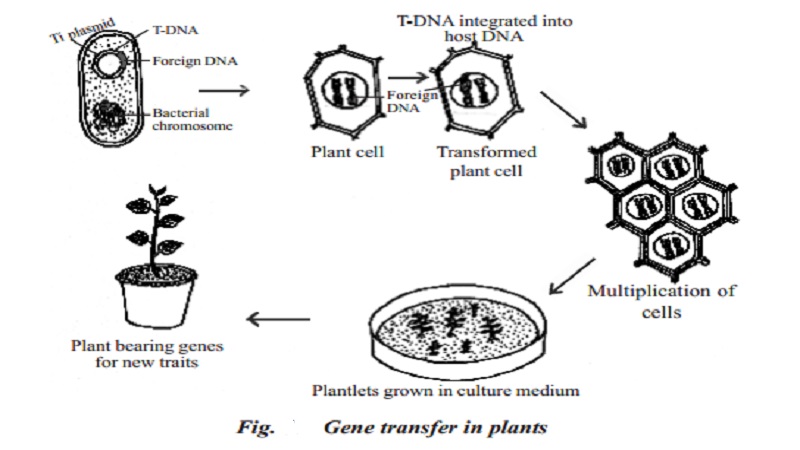 Hybridoma technology is a method for producing large numbers of identical antibodies (also called monoclonal antibodies). This process starts by injecting a mouse (or other mammals) with an antigen that provokes an immune response. A type of white blood cell, the B cell, produces antibodies that bind to the injected antigen. These antibody-producing B-cells are then harvested from the mouse and, in turn, fused with immortal B cell cancer cells, myeloma, to produce a hybrid cell line called a hybridoma, which has both the antibody-producing ability of the B-cell and the longevity and reproductivity of the myeloma.

Genetic engineering is the process of using recombinant DNA (rDNA) technology to alter the genetic makeup of an organism. Traditionally, humans have manipulated genomes indirectly by controlling breeding and selecting offspring with desired traits. Genetic engineering involves the direct manipulation of one or more genes. Most often, a gene from another species is added to an organism's genome to give it the desired phenotype. This approach is used for DNA sequencing and the commercial production of proteins.

Biotechnology has wide applications. Some of them are discussed below:

Biotechnological applications in medicine have made an immense impact in the area of healthcare by enabling the mass production of safe and more effective therapeutic drugs.

(a) The recombinant therapeutics do not induce unwanted immunological responses as in the case of similar products isolated from non-human sources.
(b) Currently, about 30 recombinant therapeutics have been approved for human use over the world.
I. Genetically engineered insulin leads to sufficient availability of insulin for the management of adult-onset diabetes.
(a) Insulin used for diabetes was earlier extracted from the pancreas of slaughtered cattle and pigs. This caused allergies or other reactions in some patients.

3.  Application in the field of fermentation

4.  Application in the field of sewage treatment

Different types of bacteria, fungi, and algae also take part in the removal of organic matter in the sewage.

5.  Application in the field of biogas

Biogas is produced by fermentation of cow dung, farm refuge, garbage, etc. by methane bacteria in anaerobic conditions. The organic remains of the biogas plants can be used as manure.

6.   Application in the field of organic acids

Biotechnology is also used for the production of lactic acid, acetic acids, etc.