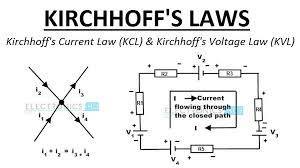 Explanation: let us consider 5 currents meeting t a junction P of the network as shown in figure.

Also, taking the negative of the expression on one side and positive sign on other side,

Gustav Robert Kirchhoff was a German physicist who contributed to the fundamental understanding of electrical circuits, spectroscopy, and the emission of black-body radiation by   heated objects. So the pronunciation is quite different than what we usually hear..