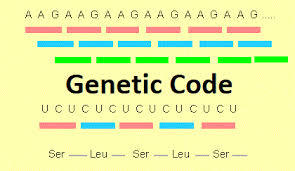 A codon is composed of three adjacent nitrogen bases which specifies one amino acid in polypeptide chain.

A nitrogen base is a constituent of only one codon.

There is no punctuation (comma) between the adjacent codon i.e. each codon is immediately followed by the next codon.

Some amino acids are coded by more than one codon, hence the code is degenerate.