Factor affecting the Velocity of Sound in a Gas

Factors Affecting the Velocity of Sound in a Gas

(a) Effect of temperature: For one mole of an ideal gas having pressure P and volume V, the equation of state is, 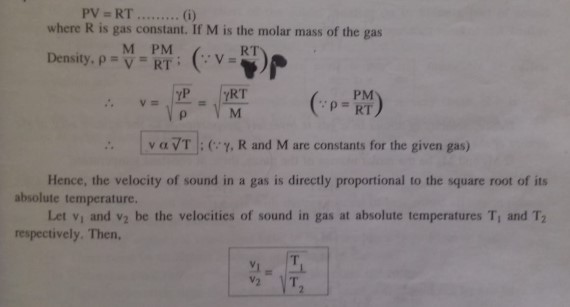 (b) Effect of pressure: For one mole of gas, equations of state is

(e) Effect of density: v1 and v2 be the velocities of sound in gases of densities ρ1, and ρ2 respectively. If γ and P are same for both, then

Hence, velocity of sound in a gas is inversely proportional to the square root of the density of the gas.

If M1, and M2 be the molar masses of the gases, then, at constant temperature,

Thus, velocity of sound is inversely proportional to the square root of molecular weight of the gas.