Velocity of Sound Wave in a Medium 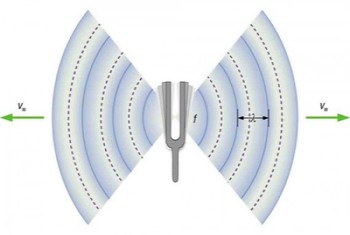 Velocity of Sound Wave in a Medium

Thus, the particles in the medium are subjected to changing stresses resulting in strain. Hence, the velocity V of a sound wave can be expressed in terms of modulus of elasticity E of the medium which is given by,

where, ρ is the density of the medium.

Proof of Newton's formula by the method of dimensions:
If the velocity V of sound in a medium depends upon the elasticity E and density ρ of the medium, then we can write:

where, K is proportionality constant and x and y are numbers, to be determined.

Equating the indices of M, L, and T on both sides, we get,

This gives the velocity of a longitudinal wave in an elastic medium.