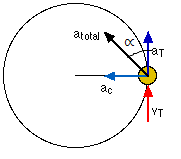 Uniform Circular Motion:-Circular motion is said to the uniform if the speed of the particle (along the circular path) remains constant.Circular Motion

(a) Angular velocity after a time t second:- ω=ω0+αt

Time period:- It is the time taken by the particle to complete one rotation.

Frequency:- The number of rotations made by the particle per second is called the frequency of rotation.

If f is the frequency, the particle describes 2πf radians per second.

(a) Velocity of the cyclist:- Greater the velocity, greater is his angle of inclination with the vertical.

(b) Radius of curvature:- Smaller the radius, greater is the angle with the vertical.

Motion in a vertical circle/looping the loop:-

The minimum velocity of the body, at the lowest point, required to take the body round a vertical circle is √5gr.

The minimum tension in the string, at the lowest point, required to take the body around the vertical circle is equal to six times the weight of the body.

(b) Condition for oscillation:- VA?√2gl

(a) The velocity changes both in magnitude as well as in direction.

(b) The velocity vector is always tangential to the path.

(c) The acceleration vector is not perpendicular to the velocity vector.

(i) Tangential acceleration at changes the magnitude of velocity vector and is defined as, at = dv/dt