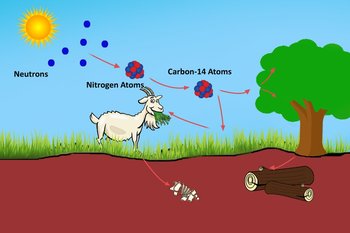 We have already studied that the half-life period of radioactive isotopes id independent of the external factors like temperatures, pressures, etc.

This important property of radioactive substance which can be used to determine the age of archeological and geological specimen with ages up to few thousand years.

Carbon 6C14 is the radioactive isotope of the carbon. The-half life of C-14 is 5600 years. Carbon-14 is continuously produced in atmosphere when the neutron from the cosmic rays interacts with the atmospheric nitrogen as indicated by the nuclear reaction:

The radioactive carbon isotope is absorbed by the plants in the form of carbon dioxide. These may be eaten by animals, which may in turn be eaten by other animals.

As soon as the plants or animals die, no new carbon is taken in, so the proportion of carbon-14 is gradually reduced by radioactive decay. By measuring the activity of C-14 in the remains of the organisms, the age of remains can be estimated. The activity of C-14 on the living organism is considered as 19 count per minute per gram.

This method of estimating the age of ancient fossil by measuring the activity of carbon-14 inside it is called radio carbon dating. This method of dating can be used not only for the determination of ages of animal fossils but also those of wood, paper, clothes and other organic materials.