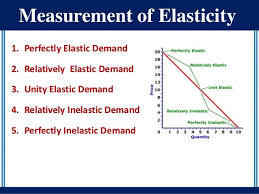 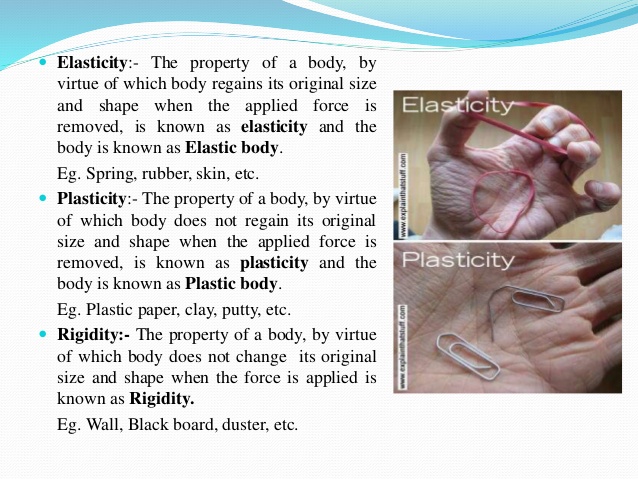 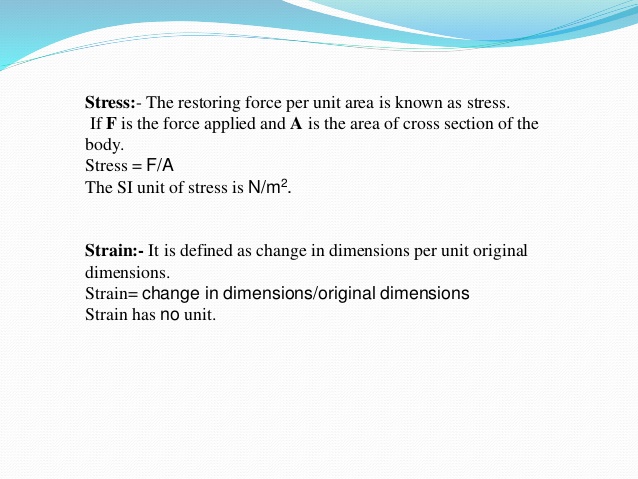 We define Young’s modulus by a combination of these two ratios:

Young’s modulus is typically used to characterize a rod or wire stressed under either tension or compression. Because strain is a dimensionless quantity, Y has units of force per unit area.

be applied to the substance before it becomes permanently deformed and does not return to its initial length. It is possible to exceed the elastic limit of a substance by applying a sufficiently large stress.

Another type of deformation occurs when an object is subjected to a force parallel to one of its faces while the opposite face is held fixed by another force (Fig. 12.13a). The stress in this case is called a shear stress.

If the object is originally a rectangular block, a shear stress results in a shape whose cross section is a parallelogram.

To a first approximation (for small distortions),

no change in volume occurs with this deformation.

The shear stress as F/A, the ratio of the tangential force,F to the area,A of the face being sheared.

The shear strain is defined as the ratio dx/h, where dx is the horizontal distance that the sheared face moves and h is the height of the object. In terms of these quantities, the shear modulus is

Like Young’s modulus, the unit of shear modulus is the ratio of that for force to that for area

Bulk modulus characterizes the response of an object to changes in a force of uniform magnitude applied perpendicularly over the entire surface of the object as shown in Figure 12.14.

Such a uniform distribution of forces occurs when an object is immersed in a fluid. An object subject to this type of deformation undergoes a change in volume but no change in shape.

The volume stress is defined as the ratio

of the magnitude of the total force F exerted on a surface to the area A of the surface. The quantity P = F/A is called pressure

If the pressure on an object changes by an amount ∆P = ∆F/A, the object experiences a volume change ∆V.

The volume strain is equal to the change in volume ∆V divided by the initial volume Vi.

If the pressure on an object changes by an amount ∆P = ∆F/A, the object

experiences a volume change ∆V. The volume strain is equal to the change in volume

The extension of a thin wire such as Q for increasing loads of forces F may be found by experiment to be as follows:

When the extension, e, is plotted against the force F in the wire, a graph is obtained which is a straight line OA, followed by a curve ABY rising slowly at first and then very sharply. figure 5.1(ii). Up to A, about 50 N, the results show that the extension increased by 0.014 mm per N added to the wire. A, then, is the proportional limit.

Along OA, and upto L just beyond A, the wire returned to its original length when the load was removed. The force at L is called the elastic limit. Along OL the metal is said to undergo changes called elastic deformation. 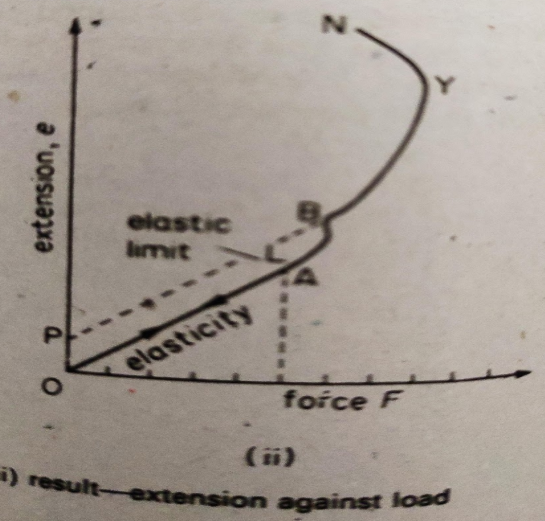 From the straight line graph OA, we deduce that the extension is proportional to the force or tension in a wire if the proportional limit is not exceeded. This is known as Hooke’s law after Robert Hooke, founder of the Royal Society, who discovered the relation in 1676.

The extension of wire is due to the displacement of its molecules from their mean position. So the law Shows that when a molecule of the metal is slightly displaced from its mean position the restoring force is proportional to its displacement. One may therefore conclude that the molecules of a solid metal undergoing Simple Harmonic Motion. Up to the elastic limit the energy gained or stored by a stretched wire is molecular Potential energy, which is recovered when the load is removed. 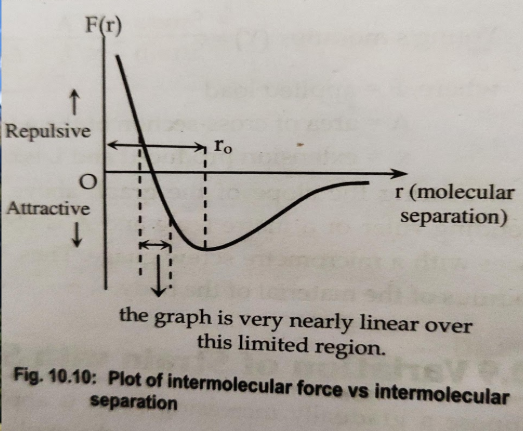 When stress is zero, the means separation of the molecule is ‘Ro’. A tensile stress acts in opposition to the attractive forces between the molecules and is therefore capable of increasing their separation. For values of ‘r' close to ‘Ro’, is the graph can be considered to be linear. In this region, equal increase in tensile stress produces the equal increase in extension, which perfectly explain the consequence of hooke’s law but the law cannot explain the relation between stress and strain out of this region. Note that Hooke’s law also applies to compressive stress

Experimental Verification of Hooke's Law and the Determination of Young's Modulus

Consider an experimental arrangement as shown in figure 10.11(i). It consists of two long wires P and Q are suspended from a rigid support. Both the wires are made from the same material and are of same length so that errors due to expansion as a result of temperature changes during the experiment are avoided. At the end of the wire, P a small fixed load is attached to it. Here the test wire is the wire Q, at the end of which variable load is attached. A vernier scale V which can slide over the reference scale M is also attached to it which measures the extension of the wire Q.

The initial length of the wire Q is first noted and its diameter is measured with the help of micrometre screw gauge. Let ‘L' and ‘d' be the length and diameter of the wire respectively. The test wire Q then loaded (typically up to 100 N in 5 steps) and the resulting extension is measured as a function of the load. If test wire is free of kinks at the start and the limit of proportionality is not exceeded, the measurements can be used to produce a plot similar to the figure 10.11(ii) Clearly, the graph suggest that load is directly proportional to the extension produced which verifies hooke’s law. 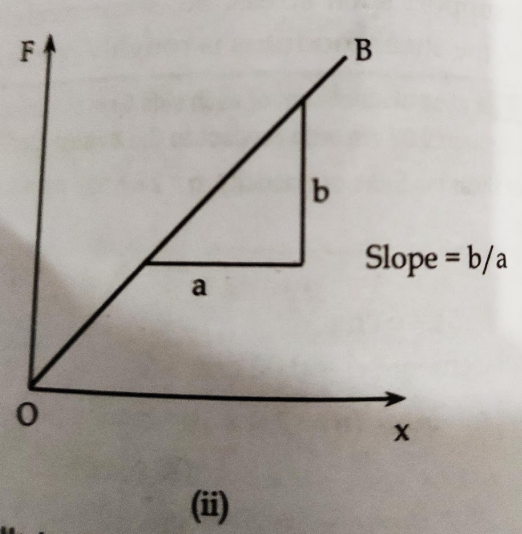 A = area of cross-section of the wire

By measuring the slope of the graph above, we can calculate (x/F). L can be measured with an extending ruler or a metre scale and A is obtained by determining the diameter of wire at several places with a micrometre screw gauge. Thus, knowing (x/F), L and A, we can calculate the Young's Modulus of the material of the body.

More accurately, instead of using ‘increase’ or ‘decrease’ it is prefer to use the term ‘change’. Experimentally, it is found that lateral strain is directly proportional to longitudinal strain within elastic limit. 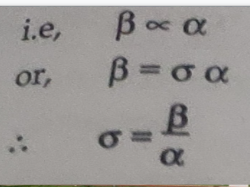 Where,     is the elastic constant known as poisson’s ratio.

Thus, Poisson’s ratio is the ratio of lateral strain to longitudinal strain.

Let us consider a wire of original length 'L' and diameter ‘d' is stretched by force ‘F' as shown in figure 10.14. Let ‘e' be the increase in length and ∆d be the decrease in diameter. Then,

Being just a ratio between two strains poisson’s ratio is a pure number having no units and dimension. It's value usually lies between 0.2 to 0.4.

Elastic after effect: Some materials such as quartz fibre, phosphor bronze, etc. regain their original configuration instantaneously after the removal of deforming forces while other material such as glass fibres appreciably long time to do so.

Elastic after effect is negligibly small for quartz fibres, phosphor bronze, etc. while it is large for glass fibres. A glass fibre will take hours to regain its original configuration.

Elastic fatigue: A material gradually loses its elastic strength due to the repeated alternating strains. For example, hard wire can be broken by bending it repeatedly in opposite direction. This loss of elastic behaviour is called elastic fatigue or elastic tiredness. Therefore, Elastic fatigue is defined as the loss of elastic strength of a material caused due to repeated alternating strains to which the material is subjected. For the same reason, a bridge after long use, is declared unsafe. Similarly, due to the same reason, spring balance shows wrong reading after long use.

Elastic Hysteresis: When a material (like rubber) is stretched a few times its natural length, it returns to its original length after removal of the forces. This proverty arises from their molecular arrangements. 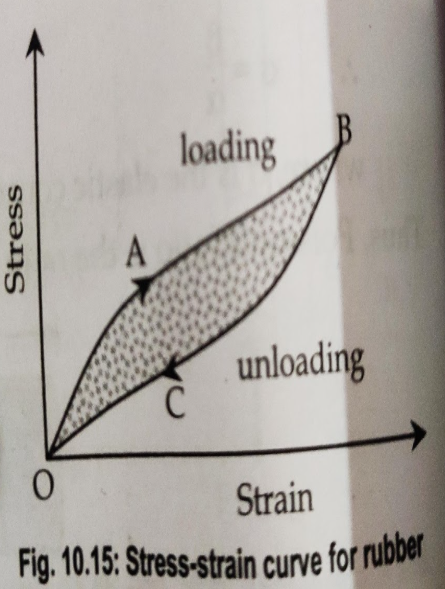 The difference of energy is absorbed by the material and appears as heat. This phenomenon is called elastic hysteresis.

There are some applications of Elastic Hysteresis:

Energy stored in a stretched wire

Let us consider a wire of length L suspended from a rigid support let a force f is applied to its lower end so as to extend it by a length x as shown in the figure 10.13 if the extension is at first increased by dx is so small that yep can be considered constant then the small work done dW is given by bhai

If the wire of hooks law then F = kx; where k is constant.

Alternatively since F = me, substituting for k in equation (10.10) gives,

When wire is stretched, work done is against the internal restoring force acting between the particles (molecules) of the wire. This work done appears as elastic potential energy in the wire which is also called as the strain energy stored in the wire. On the molecular level, this corresponds to the increased potential energy of the molecules which results from their increased separation.

A wire of length L and cross-sectional area A has a volume AL and therefore,

Effects of the presence of impurities: The effect of the addition of impurities in a material may increase or decrease the elastic properties according as the impurities are themselves more elastic or plastic then the materials to which they are added.

Effects of annealing: Annealingng refers to a form of heat treatment to a metal to soften it and then allowing it to cool slowly search process tends to orient the crystal grains into one particular direction forming a larger crystal grains. Hence, the elasticity of the material decreases.