Full Forms You Need to Know 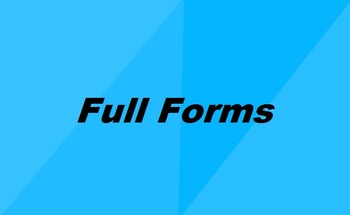 There might be a lot of short forms that you might have been using without knowing their correct full forms.Below is a list of common short-forms that you need to know.I have also put a special link in each short-form if you want to know more about it.

1.SAT: It was originally called the "Scholastic Aptitude Test" when it was announced publicly by the College Board in 1926.It's full form has changed several times since then and now it is simply called as "SAT" or "Scholastic Assessment Test".If you wanna know more about SAT then click me.

2.USB: Universal Serial Bus:If you wanna know what is the meaning behind it then click me.(It's a bit complicated.)

3.INTEL : Integrated Electronics.Here's the INTEL site if you wanna know what they are doing nowadays : https://www.intel.com/content/www/us/en/homepage.html

4.LG: Lucky Goldstar. You might have thought that the full form was "Life's Good'.But it is actually the company's tagline(motto).Here's the company's site: lg.com/us

5.ATM: In case you forgot:Automated Teller Machine.Since the word teller means someone who is working at a bank as a cashier whose duty is dispensing cash,the same Logic was used for ATM since it does the work of a teller,is automatic AND also is a machine.

6.PIN : You might have heard about this in the term PIN number especially id you use debit/credit cards.It's full form is Personal Identification Number.Its basically unique number that you have to think of to protect your data.

8.LSD: Lysergic Acid Diethylamide. It's basically a kind of a hallucinogenic drug.https://www.youtube.com/watch?v=wG5JyorwYPo

9.SENSEX: It is a stock market index which indicates how well/bad the stock of a particular company is doing. It's full form is Sensitive Index.

10.GIF: You might use them a lot on social media.It's full form is Graphic Interchange Format.Here's a brief history of GIFs.

11.SIM : You probably have a used a SIM in your daily life.It's full form is Subscriber Identity Module.

13. P.S. : You might have used this at the end of your Facebook or Instagram post probably saying something that you wanted to but were too lazy to go up and add those into your long paragraph.It's full form is Post Script(Post Scriptum In Latin) meaning written after the writing.

14.AM/PM: Their full forms are "Ante Meridian" and "Post Meridian".The word "Ante" in Latin meaning before and "Meridian" meaning mid-day or noon.So, AM meant before mid-day and PM meant after mid-day.

15.AD/BC: First is AD whose full form is Anne Domino(Latin) meaning "in the year of the lord".BC means Before Christ. The history behind BC and AD is quite complicated which is a topic for another article!Here's an article if you're curious though:AD and BC