An Intro to MORSE CODE 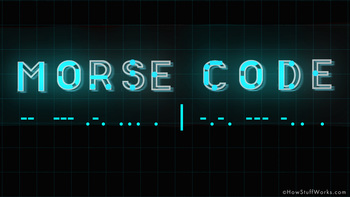 DISCLAIMER:THIS IS NOT A COMPUTER PROGRAMMING LANGUAGE.IT IS A METHOD OF REPRESENTING WORDS AND NUMBERS IN THE FORMS OF DITS AND DAHS THROUGH TELEGRAPH WIRES.

Morse code was developed by an Samuel Finley Breese  Morse in 1830's(which revolutionized long distance communication at that time) who was an American.Before the invention of Morse code long distance communications had to be done by messengers and as you can guess it took quite a long time.One time Samuel Morse had gone outside of his town New Haven to Washington D.C for some work when he received a message reading that his wife Susan was seriously ill.The next day he received he received another message saying that his wife was dead.He rushed and packed his things and went straight back to New Haven to attend her funeral.Upon arriving it was found that his wife was already buried.He was heartbroken and had decided to find a way to transmit messages over long distances instantly.

Soon after some reformations the Morse Code would revolutionize long distance communication honoring his wife.

HOW TO LEARN MORSE CODE:

There are two ways you can learn

1. VISUAL WAY: In this way you remember dits and dahs of  each letter and then try to recognize what each sound is through your memory.In this method you do not hear what actual Morse code sounds like. For example: If you were to memorize the chart given below without hearing what each letter sounds like then that would be the Visual Method.This method is a lot harder to master and Morse code in itself is a hard thing to master.

2.Phonetic Method: In this method you basically learn Morse code by hearing the sounds of each letter.Even before the electrical impulses could be converted to sounds but since nowadays telegraph is not used,people can communicate in Morse code  through radios in the form of continuous waves.

So, the most important thing is :

WHY SHOULD I LEARN MORSE CODE? I get it you guys have already enough in your life and you know better than to learn some stupid code that a widower built God knows how many years ago.But wait I will try to tell you about the importance about this form of communication and maybe try to convince you to learn Morse code.

1.Can be used in some emergency situations: I will give you guys an example with this video:https://www.youtube.com/watch?v=ioC_F8FvviM&feature=emb_title

OK, you might be thinking that nobody is going to kidnap me and you highly doubt that such a situation will ever occur in your life.Well that's for you to decide but let me tell you one thing life can be pretty uncertain and maybe in the future you might thank yourself for learning this code.

2.It's Cool:Come on don't tell me communicating in the form of dits and dahs isn't a cool way to communicate.If you have some friends who will support you in this endeavor then why not?

3.MCQ's: If you really want to cheat without being caught in MCQ's then Morse code is a wonderful way and I bet you the your invigilator will not even get a clue!

OK I have given everything there is to learn about Morse code but still if you don't want to learn at least learn the SOS signal in Morse code: SOS in Morse Code