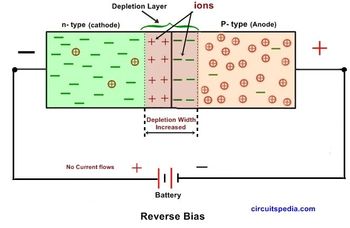 Diode: When a p-type crystal is placed in contact with n-type crystal so as to form one piece, the assembly so obtained is called p-n junction or junction diode. The surface of contact of p and n-type crystals is called junction. In the p-section, holes are the majority carriers while in n-section, the majority carriers are electrons. Due to electron-hole recombination at the junction, the small region in the vicinity of the junction which has been depleted of free charge carriers and has only immobile ions is called depletion region. And, p.d. across the region is called the potential barrier.

Characteristics curve of a diode :

Consider a circuit consisting of an adjustable dc voltage source in series with a resistor and diode. When the applied voltage is zero, there is no current. As we increase the voltage, electrons begin to flow. Because of the series combination, the current is small in all parts of the circuit. This current increases slowly at first. When the applied voltage is approximately equal to the barrier potential, the current increases rapidly. Knee voltage(Vk) is that voltage that separates low forward current from the high forward current.