J.J. Thomson's experiment to determine the sp. charge of an electron 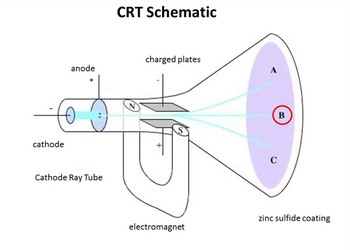 fig. Thomson's apparatus for determination of specific charge of an electron.

The experiment setup consists of an evacuated glass tube provided with the cylindrical anode (A) with a hole at its center and the cathode (C) in the form of filament which is maintained at the potential difference of V volts. The electrons are emitted from the filament cathode when suitable current is passed, through the hole H of the anode. The electron beam then travels straight along the horizontal axis of the tube and strikes in the middle of the fluorescent screen at the other end of the tube at point O.

When a sufficient amount of potential difference (V) is applied between two electrodes, electrons from the cathode accelerates with velocity (v) then,

Hence, the specific charge at the electron is determined if the values of E, B, and V are known.