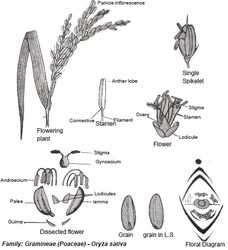 It is commonly known as grass family.

Distribution
This is the largest family of monocotyledon which includes 668 genera and more than 10,000 species. The members are cosmopolitan in distribution. Many cereal plants are included in this family. Thus, this family is considered as the economically important family.

Leaf
Cauline and ramal, ex-stipulate, sessile, simple, alternate, ligulate, leaf consists of leaf sheath and leaf blade with auricles and ligule. Leaf sheath partially or completely covers the internode. At the junction of leaf sheath and leaf blade, thin membranous ligule is present. A pair of pointed claw like appendages known as auricles occur on either side of ligule, leaf blade is thin, flattened, narrow, linear to lanceolate with parallel venation.