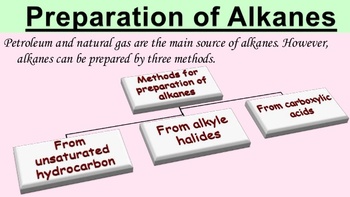 ﻿﻿1) FROM HYDROGENATION OF UNSATURATED HYDROCARBONS

When hydrogen is passed to unsaturated hydrocarbons(alkenes or alkynes) in the presence of Nickel , Platinum or Palladium as catalyst at about 250-300 degree C alkane is formed

4) BY REDUCTION OF ALKYL HALIDE

When a concentrated aqueous solution of the sodium or potassium salt of monocarboxylic acid is electrolyzed , alkane is produced at anode with liberation of carbondioxide