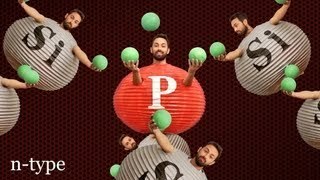 The name of the transistor is for its transfer resistor action. It has a very important property of amplifying weak signals.

It is a semiconductor device made by 2 PN junction diode.

In a transistor, there are three different regions: Emitter, Base and Collector.

Emitter: It is a heavily doped region. It is situated on one side of a transistor. It supplies charge (electrons or holes) to the base region.

Base: It is lightly doped and very thin region situated in between emitter and collector region. It passes mass of the electrons injected from emitter on to the collector.

Collector: The section of a transistor which lies on the other side of base, opposite to the emitter is called collector. Its doping level lies between that of emitter and base. It collects the charge carriers from the base; so called collector. It is always the largest region of all regions.

﻿There are two junctions.﻿

What is proper biasing?

A transistor is said to be properly biased when emitter junction is forward biased and collector junction is reverse biased.