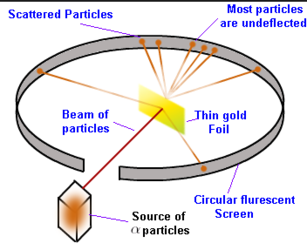 In order to understand the arrangement of electrons and protons in an atom, Rutherford and his coworkers performed a series of experiments known as Rutherford's scattering experiments. They bombarded alpha particles emitted from a radioactive substance on a piece of a thin film of gold.


Rutherford explained these observations as follows:


On the basis of the above experiment and observations, Rutherford proposed a model for the structure of the atom called Rutherford's nuclear model of the atom.

The objection to Rutherford's postulate was put forward by Clark Maxwell. According to him a charged particle (electron) continuously revolving around the nucleus under the influence of attractive forces, loses energy in the form of electromagnetic radiations. Due to this loss of energy, the speed of the electron would slow down and its orbit of revolution would become smaller and smaller and finally, the electron would fall into the nucleus.