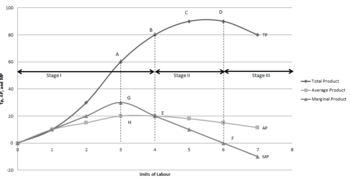 Assumptions:
The law of variable proportion is based on the following assumptions:
1. The state of technology is assumed to be given or unchanged.
2. At least, one facto of production should be fixed.
3. There must be possibility of varying the proportion of factors of production.

On the basis of the above mentioned assumptions, the law of variable proportions can be explained with the help of the table below:

This law is presented diagrammatically in the figure below: 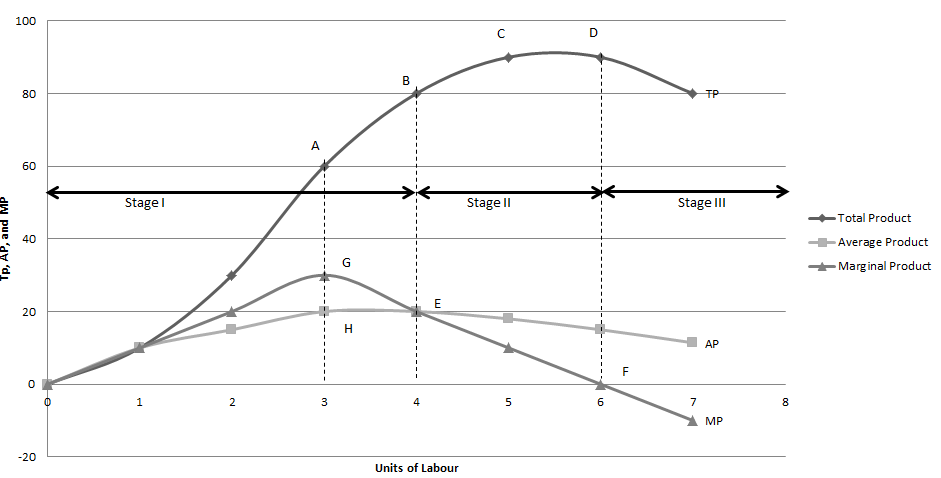 Stage III ( Stage of Negative Returns)
This stage begins from the point D. In this stage, TP is declining, AP is also declining and MP is negative o below X-axis. AP never becomes zero and negative.

Application of the Law

﻿The law of variable proportions specially applies to agriculture. There are several reasons why agriculture is subject to this law. These reasons are:
﻿1. The agricultural operations are spread out over a wide area and consequently supervision cannot be very effective.
﻿2. Scope for the use of specialized machinery is also very limited.
﻿3. There are further limitations arising from the seasonal nature of the industry, Agricultural operations are likely to be interrupted by rainfall and other climatic change.
﻿