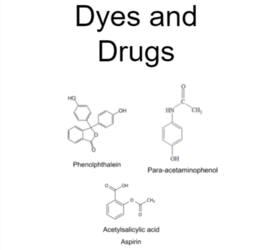 Dyes are the natural or synthetic coloured substances, which are used in imparting colour to textiles, silk, wool, foodstuff, leather etc.

Characteristics of dyes:
All coloured substances are not dyes. A dye should have following characters:
a. It must be a coloured compound that can be firmly fixed to a fabric from its solution directly or with the help of mordant.
b. Once fixed to the fabric, it should be inert to light and resistant to washing, heat and bleaching.

A dye is made up of two parts:

They are the unsaturated groups responsible for the colour of the dye.

They are the colour intensifying groups which do not impart colour in absence of chromophores.

The polar auxochromes make a dye water soluble and binds it to the fabric.

These are the dyes obtained from animal and vegetable sources.

These are the dyes prepared in the lab by artificial means.

They are used as dyes for oil and lacquers.

It is used as an indicator.

2. Phthalein dye: Its chromophore unit is

It is used as an indicator.

3. Nitro dye: Its chromophore unit is 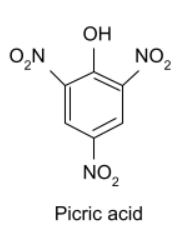 It is used as dye for wool.

On the basis of method of application, dyes are of different types:

1. Direct dyes: - These are water soluble dyes and fabric is directly immersed into their aqueous solution. It is better for the fabric which can form hydrogen bonds with the dyes.
Example:- Martius yellow

3. Mordant dyes: - These are the dyes which are applied to the fabrics with the coordination of salts of metals like Al, Cr, Ba etc called mordants.  Example: Alizarin.

Drugs are of the two types of the basis of their therapeutic action:

A] Pharmacodynamic Agents: They have effects in organisms but are not specific remedies for the particular diseases.

B] Chemotherapeutic Agents: They are used in treatment and cure of specific diseases. Examples: (i) Antibiotics (ii) Antiseptics (iii) Anti-Fungal (iv) Antiprotozoal etc.

2. Analgesic Drugs: These are the drugs which relieve all sorts of pains without loss of consciousness and are commonly called painkillers. Examples: Novalgin, Melubrina, etc. 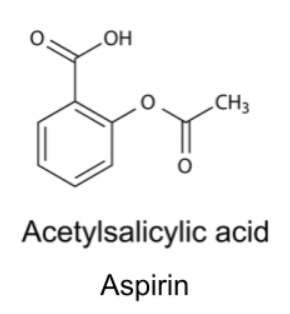 3. Analgesics and Antipyretics: These are the drugs which are used to reduce body temperature as well as relieve pains. Examples: Aspirin, Phenacetin, Aminopyrene etc.

4. Antiseptics: These are the drugs which kill or prevent the growth of microorganisms.

i) Tincture of Iodine (alcoholic solution of I2)

Dettol is a mixture of chloroxylenol and terpineol in alcohol.

5. Antibiotics: These are the drugs derived from certain microorganisms which inhibit the growth of or kill some other microorganisms.
Examples:

i) Broad spectrum antibiotics: They are general and act against several microorganisms

6. Tranquilizers: They are used to treat mental disorders. They reduce anxiety and tension and restore the peace of mind. Sedatives like Diazepam and Equanil do not induce sleep whereas Hypnotics induce sleep.

7. Anaesthetics: These are the drugs which induce insensitivity.

They are the chemically synthesized (not from microorganisms) drugs acting as antibiotics. The parent drug is sulphanilamide.

Compulsive physiological need for a habit forming drug such as heroin, morphine, cocaine, etc is called drug addiction. These produce a false feeling of happiness, peace and tranquility ultimately leading to physical and mental sickness.

It can be carried out by withdrawal of the drug addict from the drug in a rehabilitation centre under medical supervision.

Alternatively, other less effective types of drugs can be substituted. For example, Methadone instead of morphine.

twelve chemistry Chemistry in the Service of Mankind