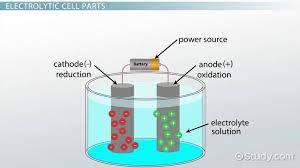 A device which is used to convert chemical energy into electrical energy is called electrochemical cell or galvanic cell.

A device which is used to convert electrical energy into chemical energy is called electrolytic cell.

Oxidation is a half reaction in which the loss of electron or increase in positive charge takes  place. The atom or ion which lose the electron is said to be oxidized. The oxidized atoms or ions  act as anode in electrochemical cell.

Reduction is a half reaction in which gain of electron or decrease in positive charge (+ve  charge) takes place. The atom or ion which gain electron is said to reduce. The reduced  atoms or ions act as cathode in electrochemical cell.

A reaction in which oxidation and reduction occur simultaneously is called redox-reaction.  In a redox reaction one of the substance lose electron while the other gains the same number  of electrons. Example: Zn + CusO4 ⇾ ZnSO4 + Cu

Symbolic representation of an electrochemical cell.

The ways of representation of electrochemical cell are:

written on the right from the self-bridge.

The tendency of an electrode to lose or gain electron when it is in contact with its  own ionic solution is called its electrode potential and denoted by a symbol" E".

The force which causes the flow of electron from anode to cathode and result in the flow of current in a circuit is called electromotive force or  emf of cell. These forces arise due to the difference in potential between two electrodes.

The emf of a cell determined under standard condition   is called  the standard emf and denoted by a symbol E0 cell .The standard  conditions are:

In standard hydrogen electrode, hydrogen gas at 1atm pressure is  passed into 1M HCl solution in which platinum metal remains  immersed which is shown in a figure below.

The standard hydrogen electrode may act as a cathode or anode when it is combined with experimental electrode. So its notation may be represented as:

It is difficult to maintain unit concentration of H+ ion.

ii.) It is difficult to maintain 1 atm pressure.

when Zn electrode comes in contact with Zn++ ion, these exist an equilibrium between Zn and its ion