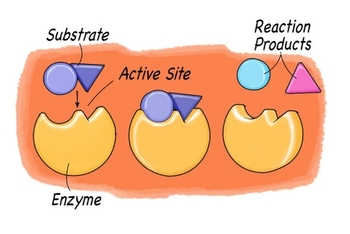 Enzymes are complex macromolecules proteinaceous in composition,  colloidal and thermolabile in nature which are used  to increase the rate of chemical reaction in living organisms without itself being unchanged. In fact, enzymes are the biocatalysts (catalysts of living organisms).

The term enzyme isolated was from is extract and called as zymase that converted sugar into alcohol. This was shown by Buchner in 1897 for which he was awarded Nobel prize in 1903. Some nai 1926 show the protein nature of enzymes and was also awarded Nobel prize for proving that enzymes can be crystallized.

﻿On the basis of functioning in or out of living cells enzymes are of two types:

﻿Exoenzymes: Exoenzymes are the the extracellular enzymes released by the living cells and catalyse the biochemical reaction outside the living cells for example enzymes of digestive juices, lysozymes of tears.

Similarly, on the basis of composition  enzymes can be categorised into two groups

Simple ﻿Enzymes : Simple enzymes are composed of proteins only without any additional group. For example trypsin, Urease, Pepsin etc.

Conjugated Enzymes: Conjugated enzymes are composed of proteins along with some non proteinaceous additional group for example carboxylase, transferases etc.

Except few enzymes like RNA enzymes all enzymes are made of protein which is found which is the functional unit or active part of enzyme called holoenzyme. It is generally composed of two types: 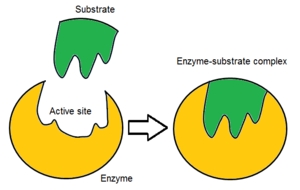 During the the reaction an enzyme combines with the substrate at its active site and forms of substrate enzyme- complex. These complexes later break down into you want her more end products depending on the type of chemical reaction but the enzyme remains unchanged. Enzyme activity has been found to be influenced by bhai number of factors such as temperature, PH , water concentration of substrate and enzyme. Enzyme activity is easily lost by the denaturation or degradation of protein part of enzyme which occurs by a number of factors such as heat high energy radiation size of of heavy metals and organic solvents.