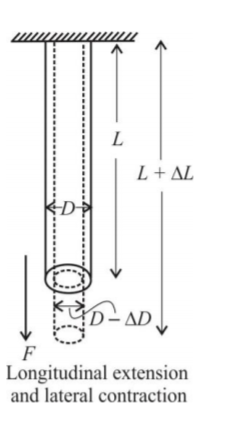 ↪ If the length of a wire is increased by a force, its diameter decreases.
↪ The change in length per unit original length of the wire along the direction of the force is called longitudinal strain and the change in diameter per unit original diameter perpendicular to the direction of the force is called lateral strain.
↪ Within elastic limit, the lateral strain β is directly proportional to longitudinal strain α.
That is,

↪ The constant of proportionality σ is called Poisson's ratio and is defined as the ratio of the lateral strain to the longitudinal strain.
↪ Suppose a wire of length L and diameter D is subjected to a load (force) so that its length increases to L + ∆L and its diameter decreases to D – ∆D.