↪ Suppose a metallic wire of uniform cross-section is suspended from a rigid support.
↪ If the load at the other end is gradually increased, the length goes on increasing.
↪ A graph of stress and strain is as shown in the figure and it has the following portions.

↪ The portion OA of the graph is a straight line showing that up to point A, Hooke's law is valid.
↪ The point A is called the limit of proportionality.
↪ It is the greatest stress which the material sustains without the departure from the linear relation between stress and strain.

↪ If the stress is increased beyond elastic limit, a point C is reached at which there is a noticeable increase in length.
↪ The point C is called the yield point. If the wire is unloaded at any point between B and C, it will not regain its original length.

↪ If the stress is increased beyond point C, the length of the wire increased rapidly until point D is obtained and the wire breaks.
↪ The point D is called the ultimate strength or breaking stress.

↪ Elastic fatigue is defined as the loss of elastic strength of a material due to repeated strains to which the material is subjected.
↪ The breaking of some old metal bridges is due to elastic fatigue.
↪ For this reason, railway bridges are declared unsafe after their use for a reasonably long period.

↪ The delay in regaining the original state by an elastic object after the removal of deforming forces is called elastic after effect.
↪ It has been found that a quartz fiber returns immediately to its normal state when a twisting force or couple acting on it is removed.
↪ But glass fibers take hours to return to their original state.

Elastic Hysteresis and its Importance 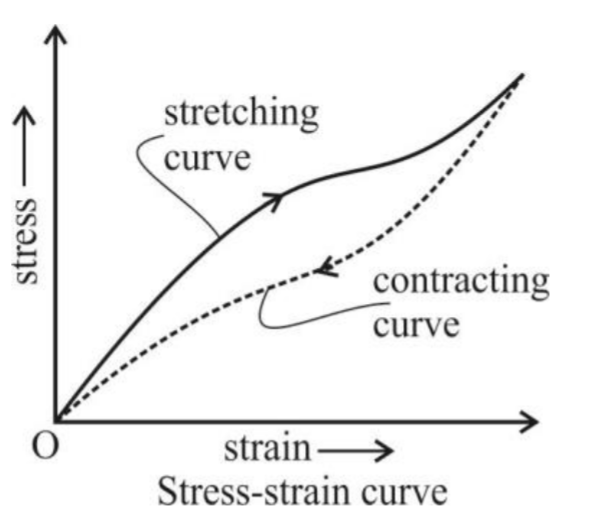 ↪ Suppose a vulcanized rubber is stretched by more than several times its original length.
↪ Even though the stress is not proportional to the strain, the behavior is elastic.
↪ The material returns to its original length when the load is removed.
↪ The material follows different stress-strain curves for increasing and decreasing stress.
↪ This lagging of strain with stress is called elastic hysteresis.
↪ Rubber with large elastic hysteresis is very useful for absorbing vibrations such as in engine mounts and shock absorber bushings for cars.