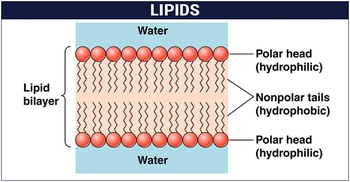 Lipids are the the esters of fatty acids and glycerol made of C, H and O. However, the number of of oxygen is less as compared to carbohydrate.

They are insoluble in water but soluble in organic solvent like acetone, ether alcohol etc. They need large amount of oxygen for the the oxidation to release energy.  The energy density yield of  lipid  is 37KJ/gm. The caloric value of 1gm of fat is 9.45kcal. 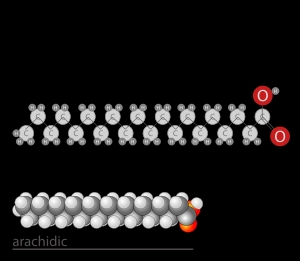 Fatty acids are the organic acids having hydrocarbon chain that in end carboxylic acid. They are carboxylic acid having long hydrophobic chain usually from 4 to 30.
General formula : -RCOOH

﻿On the basis of bond formed between the carbon chains of fatty acids are of two types they are:

﻿On the basis of composition lipids categorized into tree types: 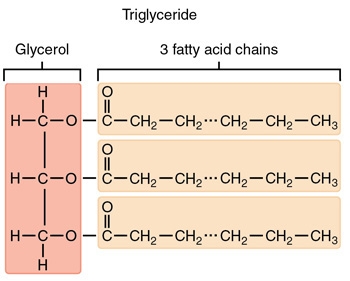 They are esters of fatty acids and alcohol only. There are no additional compounds. On hydrolysis they yield fatty acid and alcohol.

They are broadly classified into  Neutral or true fat, Oils and Wax

I) Neural or True Fat

Diglyceride: Consists one molecule of glycerol and two molecules of fatty acid.

Triglyceride: Consists one molecule of glycerol and three molecules of fatty acid. 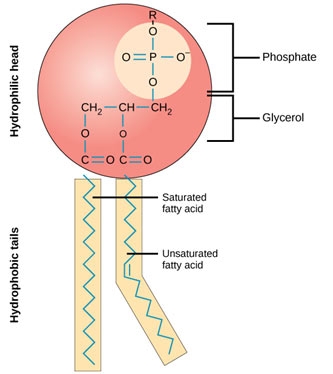 Fig: Phospholipid
﻿Compound or conjugated Lipids are esters of fatty acids with alcohol which also possesses additional groups besides fatty acids and alcohol.

Phospholipid: They are composed of lipid and phosphoric acid. They are the most important Lipids from biological point of view. They form plasma membrane and other endomembranes of a nerve tissue.

Glycolipid: They are composed of lipids and carbohydrates. They are found in membranes and are important constituents of white matter and nerve tissue.

Lipoprotein: They are composed of lipid and carbohydrates. Various types of lipoproteins are found in blood plasma.

﻿They include hydrolyzed products of simple and complex Lipids. For example: Steroids, Terpenes, Carotenoids etc. 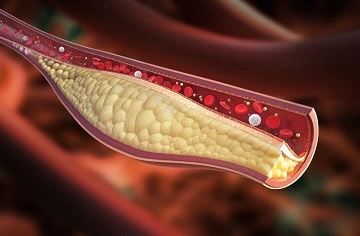 ﻿Cholesterol is a precursor molecule for many sex hormones like progesterone, testosterone and adrenocorticotropic hormones like corticol.