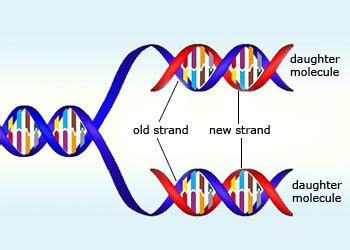 ﻿The steps involved in DNA replication are discussed here. 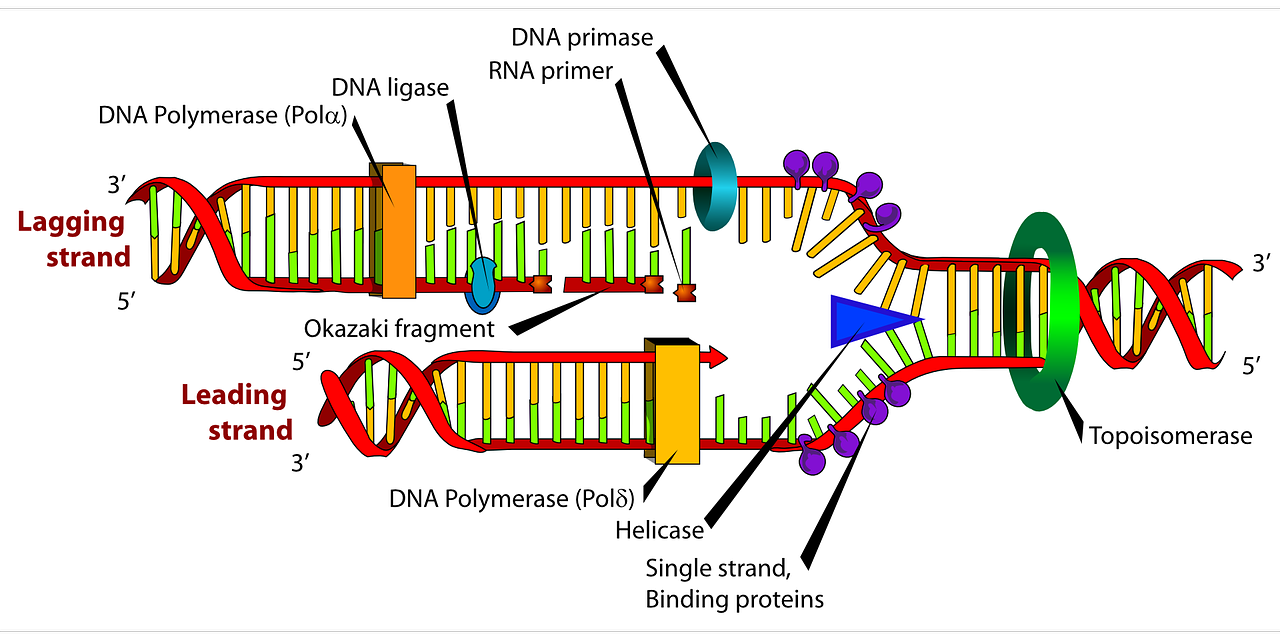 A DNA consists of many replication units called replicon. Replication is initiated in each replicon by producing a nick in one of the strands at a specific initiation point called as 'Ori-site'. The nick is produced by an enzyme called endonuclease.. In circular DNA of prokaryotes and cytoplasmic DNAs, there is only one origin of replication while there are several origin of replication in eukaryotes having giant DNA molecule.

Free nucleotide present in the nucleoplasm as deoxyribonucleosides monophosphate (dNMPs)-dAMPs, dGMPs, dCMPs,dTMPs are activated into triphosphates (dATPs, dGTPs, dCTPs, dTTPs) by the help of enzyme phosphorylase in the presence of ATP. This process is phosphorylation.

Unwinding of the two DNA strands takes place in the presence of the enzyme helicase which breaks the hydrogen bond between the nucleotide. Due to unwinding of two DNA strands, a Y-shaped structure is formed called replication fork. Now, two separated DNA strands are called the templates. Unwinding creates coiling tension ahead of moving replication fork. To relieve the stress due to the super coiling, Topoisomerase-I (also called DNA gyrase) breaks the phosphodiester link in one of strands of the helix and thus allows the helix to rotate around the remaining unbroken strand. The  enzyme then quickly reseals the link and thus the phosphodiester link is reformed. As soon as the unwinding takes place, a protein called single stranded binding protein (SSB) helps in stabilizing the nucleotide and prevents their annealing. Thus, SSB is also called Helix Destabilizing(HD) protein.

Replication is guided by a RNA primer. RNA primer is a small strand of RNA which is synthesized by an enzyme primase. Primer is attached on the template DNA at a site called initiation site from where DNA synthesis begins. Replication is always initiated from 5' to 3' direction on the master strand 3'-5'.

Once the primer strand is formed, DNA replication begins with the help of DNA polymarase-III (in prokaryotes) and DNA polymarase in (eukaryotes) along with the ATP and Mg2+. Nucleotide chain formation proceeds from the initiation site by the addition of new bases. Due to base specificity (A pairs with T and G pairs with C), bases of the template DNA strand attracts its complementary bases from nucleoplasm. New bases are added only in the direction 5' to 3' in the master strand 3'-5'.

Replication proceeds on both template DNA strand. Therefore, the replication process is bi-directional. Since the strands are anti parallel, the new strands must be formed in opposite directions. Replication is continuous in one template strand, i.e. single RNA primer is responsible for the formation of the whole strand, thus formed new strand is called leading strand. However, the replication is not continuous on the other template i.r. more than one RNA primers are responsible for the formation of the whole strand. As a result, many smaller segments are formed, called Okazaki fragments. The final gaps between the newly formed Okazaki fragments are joined together by a DNA ligase enzyme which forms a complete daughter strand. Such strand is called lagging strand. After nucleotide chain formation is complete, the RNA primer is removed and the gap is filled by complementary bases. It is made possible by enzyme DNA ligase. 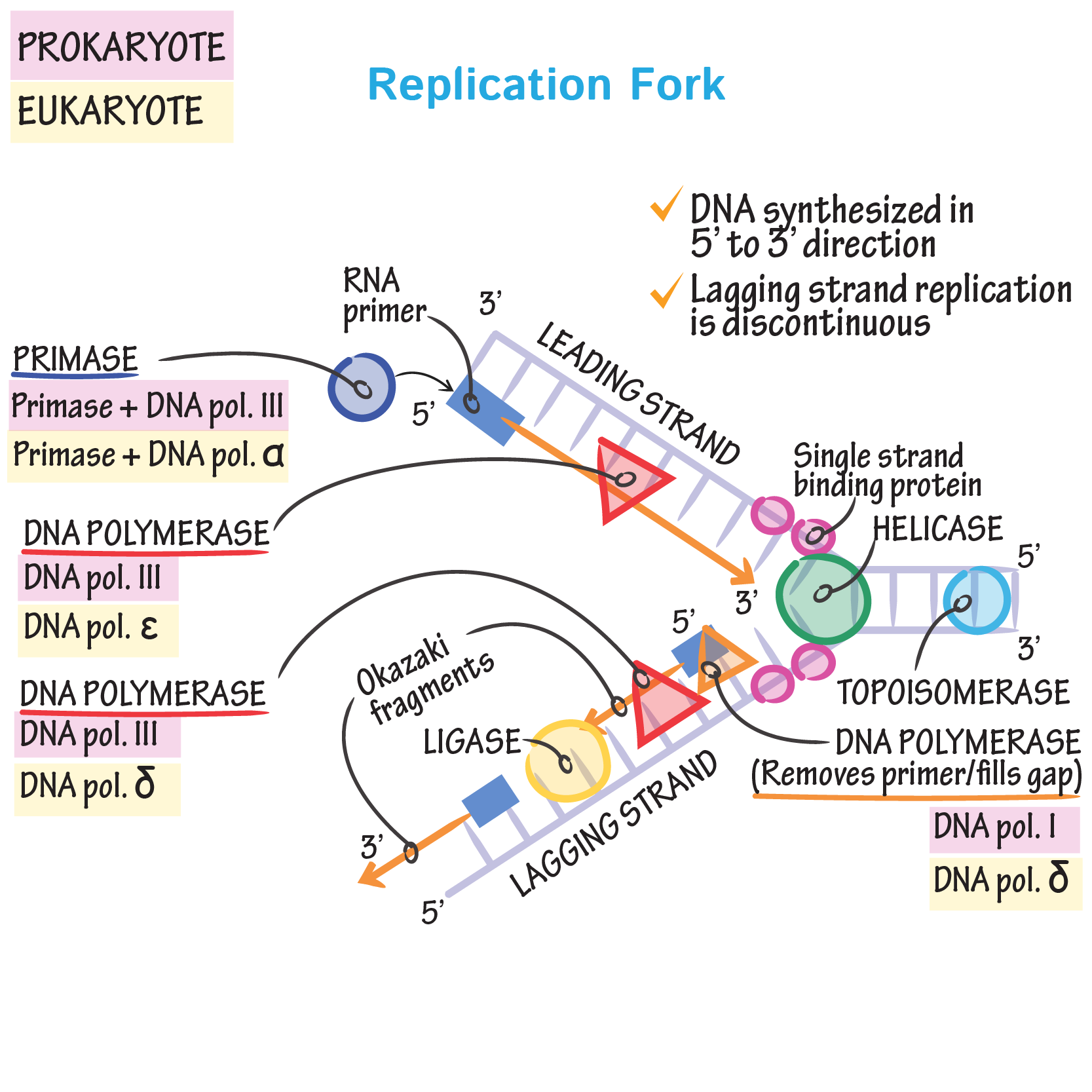 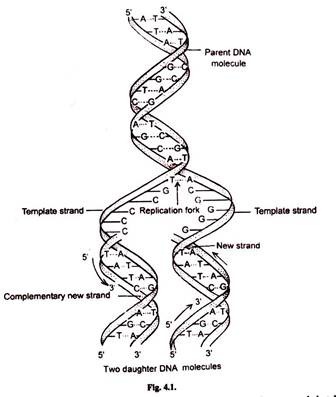 In some DNA molecules, replication is terminated whenever two replication forks meet. In others, specific termination sequences block further replication. A termination protein called 'Tus' in bacteria binds and the blocks the movement of the helicase and preventing further DNA replication.

Sometimes wrong bases may be inserted during replication. The probability of such error is about once per 100,000 nucleotide. This error is corrected in a process called proofreading. The exonuclease activity of DNA polymerase removes the incorrectly paired nucleotide and then inserts the correct nucleotide.

Finally, daughter DNAs are synthesized. Each DNA molecule has one strand from the parent and one is new. It means half of the original DNA is conserved and half is newly synthesized. This is called semi-conservative mode of DNA replication.