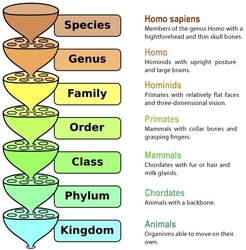 Nomenclature is the system of giving proper names to all the identified living organisms so that these organisms can be identified from one another.

Since a long period of time, living organisms were randomly named by different people of different regions as per their reliability.

However, as such common names were quite indefinite and limited only  to the people of one language or even one part of the country they were replaced  by scientific system of nomenclature.

Carolus Linneaus( Father of taxonomy) the great Swedish naturalist devised a system of scientific names for plants and animals known as binomial system of nomenclature. He explained this system in in "Species Plantarum" published in 1753.

Binomial nomenclature is the biological and scientific system of naming the organisms in which the name is composed of two terms where for storm indicates the genus ( generic name) and the second term indicates species(specific name)  of the organism.

For example: The scientific name of human is is Homo sapiens where  Homo is generic name while sapiens is the specific name.

1) Name of each organism is given in two ways:  generic and specific .

3) The starting letter of the generic name must be capitalised where as all the letters of specific name are lowercased.

4) The scientific names should be underlined in handwritten and typed forms printed in in italics.

5) The name of the author (taxonomist) is used in full or abbreviated form after the full name of the organism. For example: Glycine max Linn.

6) When  a species is transferred or revised the name of the original worker is detained but in in bracket . For example: Syzygium cumini (L) Skeels.

7) A new scientific name is given on the basis of organism's characteristics,  personality or place. The new name should have no resemblances with previously published names.

8) No two generic name for the common kingdom, phylum, class, order, family are same but the  specific name can be repeated.

1) It is universally accepted system of     nomenclature so there is uniformity  in naming of plants and animals .

2) It explains the characteristics of particular genera or species.

3) New organisms can easily be named based on their characteristics and related groups.

4) There is no confusion in recognising organisms as there is only one name for organisms (species).

5) As organisms are provided Greek / Latin names it makes the name sound uniform and unique although they are difficult to pronounce and spell.