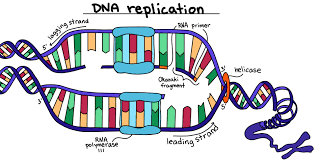 DNA Replication is the biological process of producing two identical replicas of DNA from the original DNA molecule. DNA replication occurs in all living organisms and acts as the most essential part for the biological inheritance. The cell possesses the distinctive property of division, which makes replication of DNA essential. It occurs in the S-sub stage of inter phase of the cell cycle. Replication in prokaryotes is much better understood than in the eukaryotes. The basic requirements and components of replication are the same in both prokaryotes and eukaryotes.

﻿The three possible methods of the replication of DNA are: 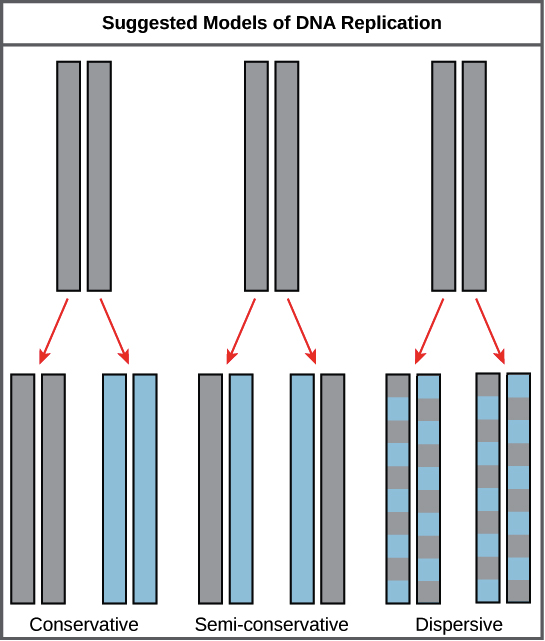 The two strands of the DNA unwind from each other, and each strand acts as a template for the synthesis of a new complementary strand. This results in two DNA molecules with one original strand and one new strand. This is the most accepted model of DNA replication and was described by Watson and Crick.

﻿DNA replication results in two DNA molecules that are mixtures of parental and new DNA. In this model,each individual strand is a patchwork of the original and new DNA.

﻿﻿The experimental proof of semi conservative model of DNA replication

﻿It is now proven that DNA replicates semi conservatively. ﻿It was shown first inn Escherichia coli and subsequently in higher organisms, such as plants and human cells. Matthew Meselson and Franklin Stahl performed their experiment and proved it in 1958. 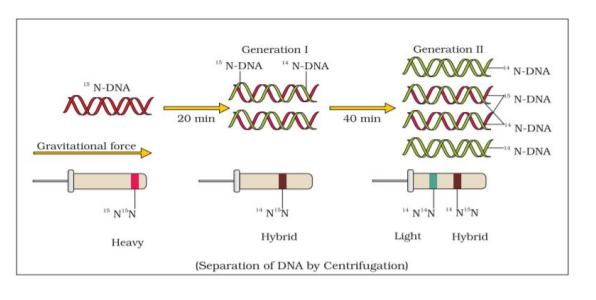 Fig: Experiment of Messelson and Stahl

In their experiment, the DNA was labelled with heavy nitrogen (N15) and was then allowed to replicate in a medium containing N14. If the replication is semi conservative, then after first generation of replication, one of the two strands would have N15 and the other strand would have normal nitrogen N14. The result would be that this molecule would have a density which is intermediate between N15 DNA and N14 DNA. This density will gradually fall and in the following generations of replication, the density would approach that of N14 DNA.

﻿The mechanism of DNA replication is complex and involves many steps. Several enzymes, protein factors and metal ions are required for this process.

It is the enzyme which breaks the hydrogen bonds and separates the DNA strands. Thus, a fork is formed at the junction known as the replication fork.

It is an enzyme responsible for the synthesis of short RNA primers. A RNA primer is a small strand of RNA which guides the replication.

It is an enzyme responsible for catalyzing the synthesis of DNA. It can add nucleotide in the template DNA.

It is an enzyme responsible for causing nick in the DNA strand so as to release the tension created during unwinding of DNA. Nick refers to cutting or breaking of phospho-diester bond.

It is an enzyme which digests the RNA primers after DNA synthesis is over.

It is an enzyme which seals the gaps in the synthesized DNA strand.

The four deoxyribonucleoside triphosphates (dNTPs) such as dATPs, dGTPs, dCTPs, dTTPs are needed as substrates for DNA synthesis. Cleavage of the high-energy bond between the phosphates provides the energy for the addition of the nucleotide.

It is essential for the synthesis of nitrogen bases.

These are essential for DNA synthesis.