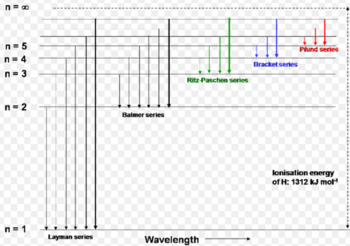 In 1913, Danish scientist Neils Bohr proposed a model of the atom which was based upon Planck's quantum theory of radiation.

The basic postulates of Bohr's theory are:

When energy is supplied to an atom, its electrons absorb energy and jump to higher energy levels. As soon as the supplied source of energy is cut, the electron jumps back to the original level. A transition from one stationary state to another is accompanied by emission or absorption of energy equal to the difference in energy of the two states. If e is energy in state 1 and E is the energy in state 2, then change of energy E-e in electron jump is given by
E-e=hv.
v=(E-e)/h.
where 'v' is the frequency of the emitted radiations and 'h' is Planck's constant.