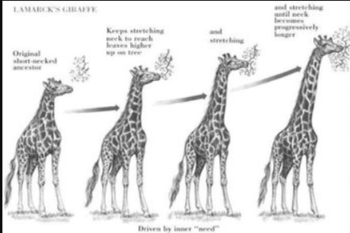 Lamarck eventually obtained a position at the Jardin des Plantes in Paris, and later at the Muséum national d’Histoire naturelle where he became a professor of zoology. In 1801, he published Système des Animaux sans Vertebres, a landmark in invertebrate taxonomy.

Lamarck is now best remembered for his proposals concerning evolution. He was the first scientist to formally propose a gradualistic theory of evolution.

“Lamarck was the first man whose conclusions on this subject excited much attention.”

This justly-celebrated naturalist first published his views in 1801, and he muchenlarged them in 1809 in his Philosophie Zoologique.

In 1803, he comments, “Do we not therefore see that through the action of the laws of organization ... nature has in favorable times, places, and climates multiplied the first germs of animal life, and allowed their organization to develop, ... and increased and diversified their organs? Then, ... aided by much time and by a slow and ongoing diversity of circumstances, she has gradually brought about in this way the state of things which we now observe. How grand is this consideration, and especially how distant is it from what is generally thought on this subject!”