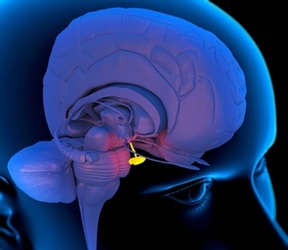 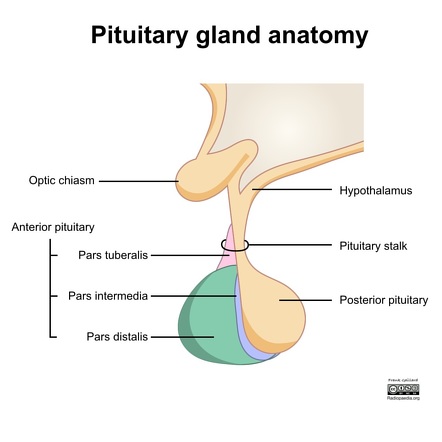 The word 'pituitary' comes from the Greek word 'pituita'. It is also known as hypophysis or hypophyseal gland. It is also called the 'master gland' as it secretes releasing glands that control the secretions of many endocrine glands.

Location: It is a cranial endocrine gland. It is located at the base of the brain below the hypothalamus. It is attached to the hypothalamus by a pituitary stalk. It is lodged inside a cavity on the sphenoid bone called pituitary fossa or sella turcica.

Function: The hormones secreted by adenohypophysis are as follows.

iii)Growth hormone(GH): It stimulates the growth of tissues of the body.

iv)Prolactin(PRL): It stimulates the mammary glands to produce milk after birth.

The hormones produced by neurohypophysis are as follows.

i)Oxytocin: It causes the contraction of the myoepithelium of mammary glands and myometrium of the uterus during childbirth.

The disorders related to secretions of the pituitary gland are as follows.

i)Dwarfism: It is caused to the deficiency of growth hormone in early childhood. It is characterized by small height.

iii)Acromegaly: It is caused due to hypersecretion of growth hormone after puberty. It is characterized by the thickening of bones.

iv)Simmond's disease: It is caused due to deficiency of growth hormones in adults. It is characterized by deterioration of body tissues and aging.