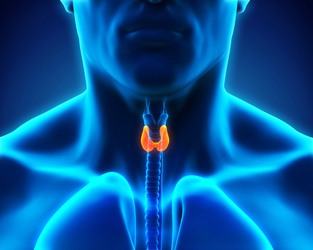 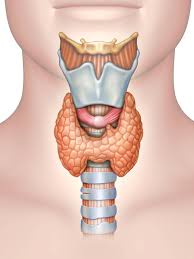 It originated from the embryonic pharyngeal endoderm.

It is situated in the neck in front of the neck, against and around the larynx and trachea.

It is butterfly shaped and bilobed. The right slope is called lobus dexter and the left lobe is called lobus sinister. They are connected by a narrow band of fibrous connective tissue called isthmus. Each lobe measures 5 cm in length, 3 cm in width and 2 cm in anterior-posterior thickness. It weighs 30 to 35 grams. The gland consists of a large number of spherical thyroid follicles. The follicles are lined by squamous cuboidal epithelium. The space inside follicles is called follicular lumen and the cells inside the follicles are called follicular cells. They are held in position by connective tissues. Between the follicles there are undifferentiated, round or oval cells called C- cells or parafollicular cells. 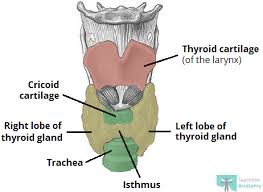 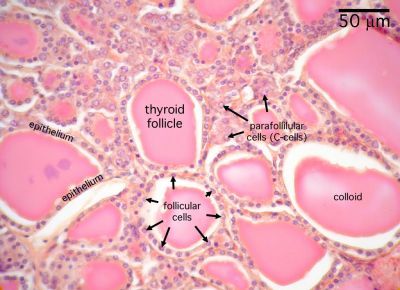 They produce 3 hormones. They are triiodothyronine, tetraiodothyronine and calcitonin or thyro- calcitonin. They are derived from iodine and amino acid tyrosine. The production of thyroid hormones is controlled by thyroid stimulating hormone or thyrotropin that is further controlled by side thyrotropin releasing hormone from hypothalamus. It works on negative feedback mechanisms.

Functions of the T3 and T4 are as follows

1)regulation of general metabolism of fats proteins and carbohydrates

4) regulation of cellular development and differentiation by stimulating protein synthesis

-It is caused due to the deficiency of iodine in blood. It is characterized by enlarged thyroid glands that are distinctly visible in the neck as a bulge.

-It is caused due to the deficiency of thyroid hormones during early childhood before the age of 5 or congenital deficiency. It is characterized by mental retardation and physical retardation

-It is caused due to the deficiency of thyroid hormone in adults. It is characterized by dry and puffy skin, dry and brittle hair, decreased mental capacity, decreased alertness,etc.

- It is an autoimmune disease in which antibodies produced in the body functions as thyroid stimulating hormone due to which excess thyroid hormones are produced. Symptoms of hyperthyroidism such as high heart rate, high blood pressure, low heat tolerance, etc are seen.